Meghalaya Police on Tuesday launched an attack on the media by serving a notice to a news portal to remove a news report and demanded “authenticity of the source of information”.

MGT Sangma, Special Superintendent of Police, sent a notice under Section 91 CrPC to Guwahati-based Northeast Now, and asked the portal to remove a news report related to the state’s opposition leader Mukul Sangma.

On August 10, Northeast Now had reported that the former Meghalaya chief minister and Congress leader Mukul Sangma may join the BJP, on the basis of credible information from sources who cannot be identified because it would affect them adversely.

In his tweet, Sangma had said “I am asking Cyber Crime Cell @MeghalayaPolice to investigate and track the source of this misinformation with criminal, malafide and defamatory intent”.

All nonsense! I am asking Cyber Crime Cell @MeghalayaPolice to investigate and track the source of this misinformation with criminal , malafide and defamatory intent. https://t.co/kaOVi3Kd9D#MalafideDefamatoryCriminalCampaign

The Northeast Now story mentioned another Congress leader from Assam, Paban Singh Ghatowar, who has not reacted.

The report came in the context of a membership drive by the BJP in northeast India as part of which many leaders including former Assam Pradesh Congress chief Bhubaneswar Kalita had joined the saffron party in recent days. 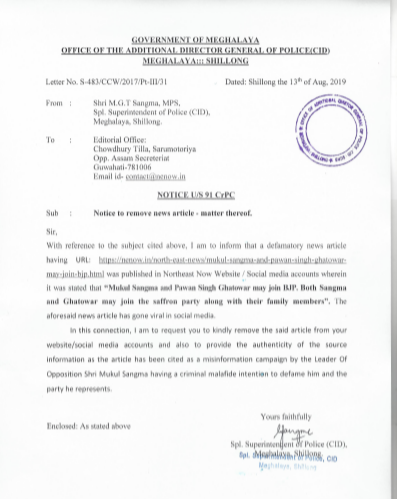 As per Section 91 in the Code of Criminal Procedure, 1973, summons to produce a document happens in case of any registered criminal case.

However, no criminal case has been registered in this matter. Moreover, it is unlawful and against media ethics to force a journalist to reveal his or her source.

“I don’t understand as to how a police officer of the rank of SSP could issue such a notice to a media organisation,” Anirban Roy, editor-in-chief of Northeast Now said.

Roy said such mistakes by a section of police officials is earning India a bad name. “That is why India is now ranked 140 (out of 180 countries) in the World Press Freedom Index,” he said.

Meghalaya is ruled by the National People’s Party led by Conrad Sangma, in alliance with the BJP, which has two MLAs, and other local parties. The Congress is the principal opposition party.