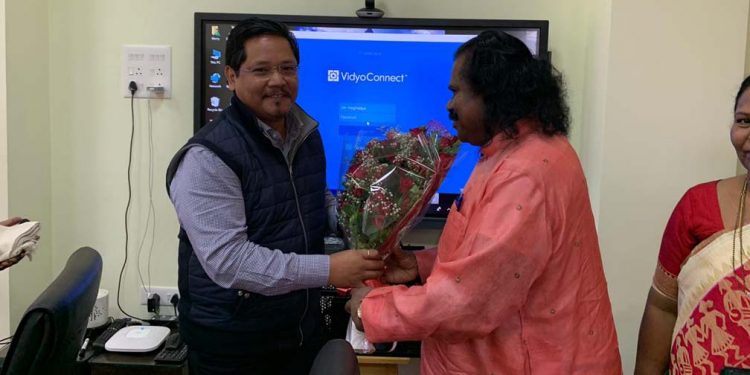 National Commission for Scheduled Tribes (NCST) chairperson Nand Kumar Sai said the commission would not support outsiders grabbing the rights of ST and other indigenous people.

Sai said this while speaking to media persons at Shillong on Wednesday following a meeting with Meghalaya chief minister Conrad K. Sangma.

Sai met the CM along with other delegates from the commission in presence of other state officials at the Main Secretariat in Shillong.

Sai was felicitated with a shawl and bouquet by the chief minister.

During the meeting, the delegation discussed with the chief minister issues related to the welfare of Scheduled Tribes.

Sai urged the Meghalaya government to preserve the heritage of the indigenous tribal people of Meghalaya and assured support from the commission.

Replying to a query on the proposed Citizenship Amendment Bill being opposed by various ethnic tribes in the Northeast, the commission’s chairperson said, granting citizenship to outsiders would harm the indigenous tribal population of the region.

“The commission will play a role on the issue of citizenship and will not support outsiders grabbing the rights of indigenous people,” he said.

The BJP has made a clear stand to bring back the Citizenship Amendment Bill if voted to power in the 2019 Lok Sabha polls, the results of which would be declared on May 23.

On Tuesday, the commission held a meeting with members of the three autonomous district councils in the state, which have been created under the Sixth Schedule of the Constitution.

The delegation commission heard from the council representatives various issues, be it the authority to issue ST certificate, lack of funding for the councils as well as the need to include Khasi language and other languages of the tribes in the Eighth Schedule of the Constitution.