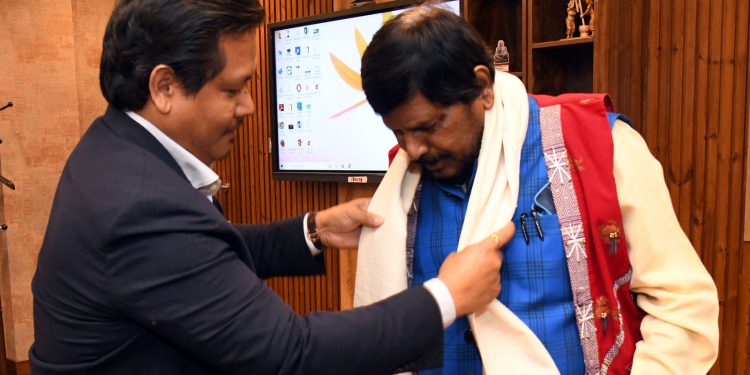 Union Minister of State for Social Justice and Empowerment Ramdas Athawale on Wednesday said there are around 44,000 divyangs in Meghalaya.

As per the 2011 census, there are 2.68 crore divyangs in the country, said Athawale.

The Union Minister also said each of 11,000 divyangs receives divyang pension of Rs 500 every month in Meghalaya.

Union Minister Athawale on Wednesday reviewed the implementation of various schemes in Meghalaya.

During the review meeting, attended by senior officials of the Meghalaya government, Athawale said every government should sincerely put in effort for enrichment of the lives of rural, ST, SC population and persons with disabilities.

The Union Minister said his ministry was working for providing opportunities and facilities for the disabled people so as to create an atmosphere which will guarantee them equal opportunities.

“This can ensure the protection of their rights and enable their full participation in the society,” he added.

“Some of the schemes include assistance to disabled persons by providing them with aids and appliances, and pensions for the disables,” said Athawale.

The minister also mentioned that the Sugamya Bharat Abhiyan or the Accessible India Campaign which is set to serve the differently-abled people of the country.

He informed that during the last five years around 4800 divyangs have been provided with various assistive devices and aids in 5 camps across Meghalaya.

“The schemes of the government of India have always been directed towards the welfare of all the people of the country including the ST, SC population and Divyangs and there have been 8000 such camps across the country,” he said.

Meghalaya Social Welfare Minister Kyrmen Shylla also requested the Union Minister for construction of a Sports Academy for persons with disabilities for which about 50 acres of land has been given by the State government.

In this regard, Athawale said his ministry will look into the proposal of setting up of the Sports Academy for persons with disabilities in the State worth Rs 350 crore.