Meghalaya Assembly may get new building by 2022: Speaker

Around Rs 145 crore to be needed for constructing the new building: Donkupar Roy 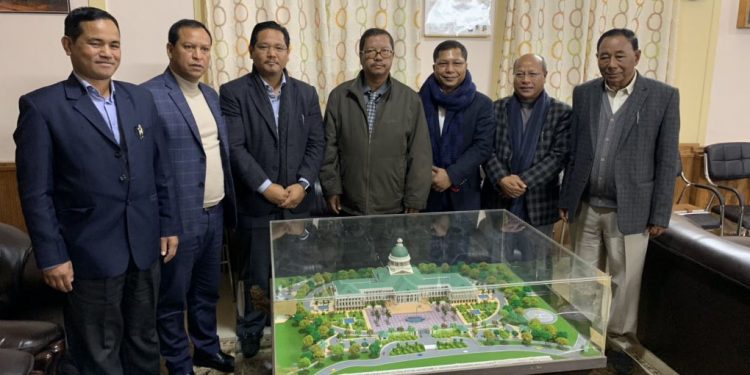 Meghalaya CM Conrad K. Sangma is seen with Assembly Speaker Donkupar Roy and other members of the high-powered committee during a meeting over construction of the new Assembly building in Shillong. Image - Twitter @SangmaConrad

The Meghalaya Legislative Assembly, which lost its heritage building to fire 18 years ago, may have its new building by 2022 as works to build the new House have already started.

The Uttar Pradesh-based Rajkiya Nirman Nigam Limited was entrusted by the high powered committee (HPC) of the Meghalaya Assembly to construct the new Assembly building.

Assembly speaker Donkupar Roy said around Rs 145 crore would be needed for constructing the new building.

The state Assembly building at Khyndai Lad was destroyed by fire on January 9, 2001.

The new Assembly building will be constructed at an 80 acres land at Mawdiangdiang in the New Shillong Township.

Roy said that the state government has earmarked Rs 25 crore for starting the construction work.

“The state would seek funds from the Finance Commission besides taking loan from the Housing & Urban Development Corporation (HUDCO). We will also seek financial assistance from the Centre,” Roy said.

According to the speaker, the new Assembly building should complete by 2022, the year when the state will celebrate its 50th year of statehood.

Though the project cost was estimated at Rs 145 crore, but the quotation that came from the company was Rs 127 crore.