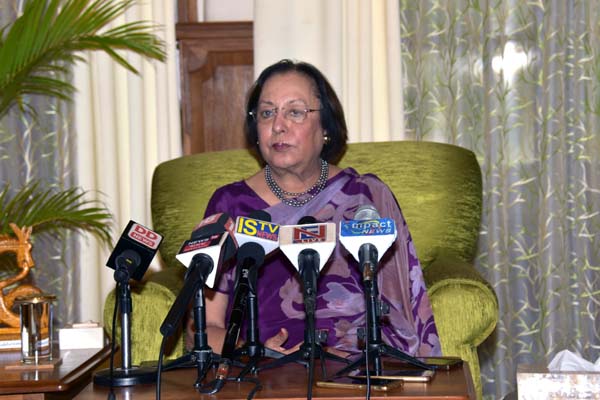 The Manipur Governor Dr Najma Heptulla said that the freedom struggle of the people of Manipur should be known across the world and to “enable the same to happen” she would urge the Ministry of Human Resource Development to rewrite history books.

A report published in the The Indian Express stated that the Governor was speaking at an event held on the occasion of Patriots’ Day celebration at Bir Tikendrajit Park in Imphal on Monday. Heptulla urged the people to always remember the selfless sacrifice of the State’s freedom fighters and appealed to them to shun violence in order to create a conducive atmosphere for the wheels of development to move fast in Manipur.

The report further stated that the Governor expressed her concerns over frequent bandhs and blockades, and said that the ultimate sufferers were the common people. “We must try to resolve all issues through dialogue,” she said, adding, “As a citizen of this country, it is our duty to make the country strong and prosperous.”

While highlighting that the day reminds one of the heroic acts of the Manipuris, the Governor alleged that very few were familiar with the freedom struggle and the names of the State’s heroes. Chief Minister N Biren Singh, on the other hand, assured that his Government would stand by its people at any cost.

Taking note of the present unrest in Manipur University, Singh said a team of HRD officials will arrive in Imphal and the issue is likely to be resolved in the next three-four days. Every year on this day (read August 13), Manipur observes Patriots’ Day to pay tribute to the State’s heroes who fought the Anglo-Manipur War in 1891 against the British Empire. Bir Tikendrajit, prince of the erstwhile Kingdom of Manipur, along with Thangal General, was publicly hung to death on this day in 1891 after they were found guilty by a special court.

Cabinet ministers, MLAs, the Chief Secretary, Director General of Police (DGP), top civil and police officials and students of various schools attended the function and paid floral tributes to the freedom fighters. A contingent of Manipur Rifles offered the guard of honour and general salute and observed two minutes of silence as a mark of respect to the martyrs.