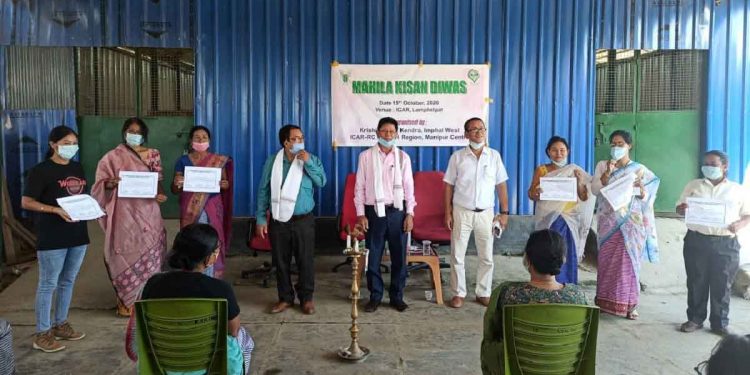 Seven women farmers of Manipur were honoured for their tireless efforts in the farming activities in diverse fields in the state.

The farmers were honoured as part of observing the National Women Farmer’s Day or Rashtriya Mahila Kisan Diwas in Imphal on Thursday.

Every year, on October 15, activities and programmes, are organized – mainly to empower women in the field of agriculture.

Speaking on the occasion, DAO Kullabidhu responding to the comment and demands of the women farmers said that the time has come for the women involved in the farming activities in the state to raise their voice to fulfill their pending grievances.

He also assured that he will take up the proposal for introducing women friendly farming equipment and technologies in order to empower women farmers in the state.

He also suggested to work together for a common target to uplift the farming community particularly the women farmers considering their involvement in the agriculture.

Women have always been the core of farming ever since agriculture is known to mankind. Reports said that approximately more than 80 per cent of women in rural India depend on agriculture for their livelihood.

Earlier appreciating the recognition, the successful women farmers of the district highlighted their practical agricultural experiences in the fields apart from running their self help groups while some shared their views and perspectives for the empowerment of women farmers.