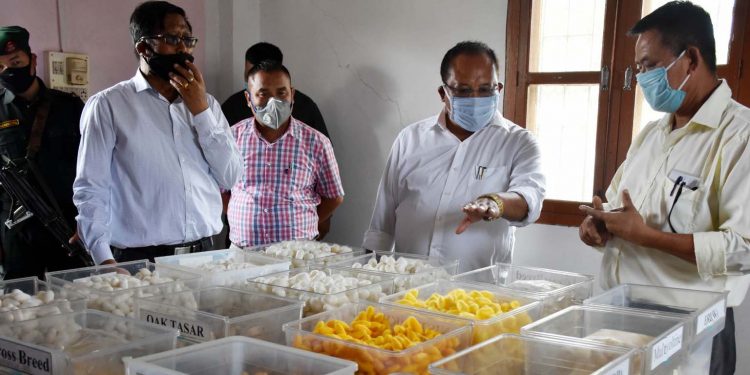 Newly inducted Manipur Sericulture Minister Awangbow Newmai said that the State Sericulture Department has full potential to be known for its silk production in the country and worldwide.

He said that the department can work in various fields to support itself without fully depending on the Centre’s help.

The minister was speaking at felicitation programme organised by the officials of the Sericulture Department at the multi-purpose hall located at Sangaipat in Manipur’s Imphal East district on Monday.

Awangbow said that he has always had an affection with the Sericulture Department as he was fortunately associated with the department, working prior as a Parliamentary Secretary during the present government.

Thanking the Chief Minister N Biren Singh for giving him the in-charge of the Sericulture Department, he assured to work for the enhancement and improvement of the department’s capabilities and sought the cooperation of all the officials and staffs.

Stating that he will support feasible ideas suggested by the learned scientist and officials which will be beneficial for the department, he said the department has been supporting weaker sections of the society by providing livelihood adding that the department can work further to give more opportunities to the people of the State.

He suggested to the department officials to organise an annual program where district-level progress can be highlighted and possible works can be discussed.

Deputy Director Ch Harendrakumar Singh also presented a PowerPoint presentation on the “Role of Sericulture in Manipur” and highlighted the ongoing and upcoming projects of the department.

He highlighted that around 17,481 families are engaged with the Sericulture activities, covering 782 villages and 32,000 hectares of land are being utilised.

He informed that Manipur is leading in the country in the production of oak Tasar silk and leads in the North East region in production of mulberry silk.