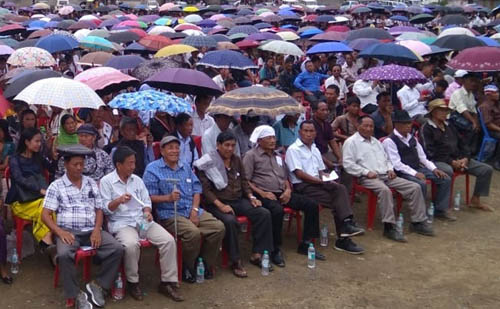 Many prayer programmes were held as part of the third anniversary of Framework agreement signed between the centre and NSCN (IM) in Chandel, Senapati and Ukhrul districts of Manipur on Friday, reports said.

On August 3, 2015, the Government of India and the NSCN-IM signed the Framework Agreement. Three years on the talks are still going on. Representatives of both the parties have been saying for quite sometimes now that the talks are in ‘advanced stage’.

The NPO President Solomon Arow, UNC Vice President Ng Lohrii, Rev Puni of ‘Collective Leadership’ and others spoke on the occasion wherein presidents of the three frontal organizations initiated mass slogan, ‘Stop dividing Nagas, Respect Nagas rights’ etc. The program was attended by a large number of delegates from all spheres of young and old of the district, sources said.

Similarly the Tangkhul Naga Long (TNL), an apex body in Ukhrul also observed the third anniversary of the Framework Agreement and adopted a three point agenda which was then submitted to Prime Minister Narendra Modi through the Deputy Commissioner of Ukhrul. Many leaders including Chairman of Ukhrul Autonomous District Council Dickson Kumrah and TNL President Weapon Zimik spoke on the occasion, it added.

Though there is no public functions, prayer services were held in the Churches of Tamenglong areas to speed up the ongoing talks and agreements to bring a solution, reports reaching here said.