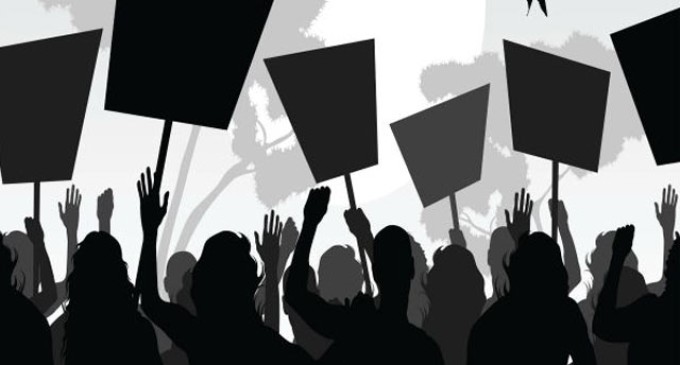 Manipuri filmstar turned politician R K Somorendro, as Kaiku, among others on Thursday joined the protest organized by the Thangmeiband United Clubs (TUC) demanding the disclosure of the Framework Agreement signed between the Government of India and the NSCN-IM.

TUC is a conglomerate of various clubs of the Thangmeiband Assembly constituency.

During the protest which began from 10 am almost all shops and business establishment kept their shutters down.

Vehicular movement in the constituency also stayed off the road.

The TUC had earlier appealed to all political parties and their representatives to join the protest.

Apart from MLA Joykishan, filmstar turned politician Kaiku, prominent figures like former Chief Minister Radhabinod Koijam who had been recently appointed as consultative committee member of the government of Manipur to take stock of the development arising out of the framework agreement also joined a public meeting.

Speaking on the occasion Joykishan said that even though there is some speculation that the territorial boundary of the state will not be affected by the so called framework agreement, however, the apprehension is about modalities like instituting two separate administration in the state.

Joykishan said that the way RB Koijam had expressed his feeling showed that there is some apprehension that this agreement will affect the state by some way or the other.

He also defended the Congress against the propaganda that is being spread by some political parties which said that Congress party is anti-hill people.

“Of the 20 MLAs from the hill constituencies, nine are elected as Congress MLAs,” Joykishan said.

During his speech on the inaugural function of the Hornbill Festival at Kesima in Nagaland, President Ram Nath Kovind had said that the final settlement will be brought within one or two months. To this Joykishan questioned, “if it is already prepared then why it is not made public to all the states concerned.”