Manipur: Kuki Revolutionary Army announces rewards for villages to get vaccinated against Covid19 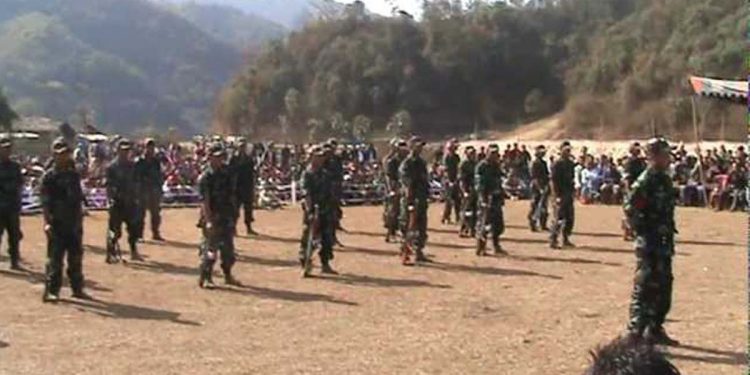 The Kuki Revolutionary Army (KRA), which is in peace talks with the Manipur government and Centre, has announced rewards for villages within its operational area to get vaccinated against Covid19.

The militant outfit in a statement said it will give Rs 1 lakh to the first fully vaccinated village.

The Kuki National Organization (KNO)/ KRA said the second fully vaccinated village will get an amount of Rs 60,000.

The third fully vaccinated village will be given an amount of Rs 40,000, the outfit announced. 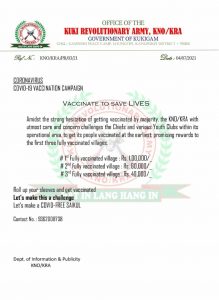 The outfit made the announcement due to the hesitation among the people towards the ongoing Covid19 vaccination drive.

In a statement, the outfit said, “Amidst the strong hesitation of getting vaccinated by majority, the KNO/KRA with utmost care and concern challenges the Chiefs and various Youth Clubs within its operational area, to get its people vaccinated at the earliest; promising rewards to the first three fully vaccinated villages.”

“Roll up your sleeves and get vaccinated; let’s make this a challenge; let’s make a Covid-free Saikul,” the information and publicity department of the outfit said.

Meanwhile, the Covid19 situation in Manipur continues to be grim as many as 8 deaths due to the infection were recorded in the state on Sunday.

With 8 more deaths, Manipur’s Covid19 death increased to 1196 on Sunday.

The state registered 643 new Covid19 positive cases on Sunday, out of which 637 were from the general public and six from the central paramilitary forces deployed in the state.