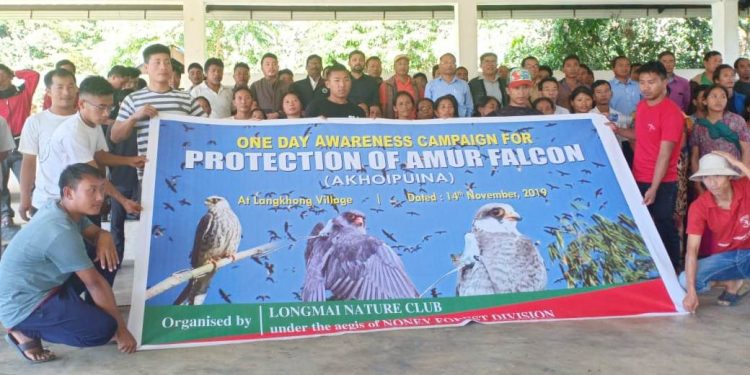 The awareness programme was organized to spread the importance of protecting the Amur falcons.

After successful satellite radio tagging of five Amur falcons in Manipur’s Tamenglong district, one of the first awareness programme for the protection of these winged guests, was held at Noney on Thursday.

The programme was organized by Noney Forest Division in collaboration with Longmai Nature Club and Langkhong village authority.

The day’s awareness programme was organized to spread the importance of protecting the Amur falcons which visits Tamenglong and Noney districts in large number every year during October.

The state forest department in collaboration with the scientists of the wildlife institute of India (WII) and local villagers successfully radio tagged five amur falcons to study their flight routes and other environmental patterns as the birds are an important biological indicators.

Suresh Kumar of the WII led a five-member team in satellite radio tagging five Amur falcons at Puching village on October 31 and November 1 after the Amur falcon tagging programme started in Manipur since last year.

On November 4, the 5th Amur falcon festival was celebrated at the Tamenglong district headquarters, 150 km west of Imphal.

Top forest officials of the state were present the awareness programme.