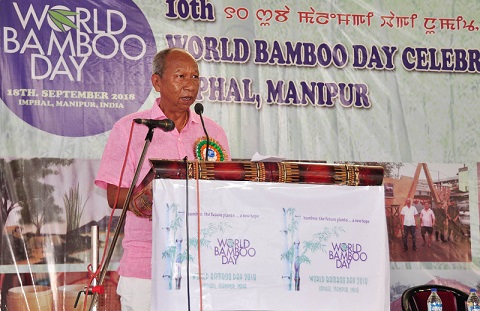 The 10th World Bamboo Day Celebration was organised with the sponsorship of National Bamboo Mission (Manipur Chapter) in co-ordination with various departments with the theme “Bamboo: the future plants…a new hope” at Singjamei in Imphal on Tuesday.

Speaking on the occasion, Speaker Khemchand said Bamboo Mission needs the centre’s attention as bamboo has enough potential for construction materials. Bamboos have just 3 years of growth cycle while trees require many years to mature.

Appreciating the effort of the local artisans to produce various products of bamboos, marketing and supplying them to other states, he said China is planning to substitute 50% of all home-made materials like tiles and ceilings made of bamboos by 2020.

In his speech, local leader Shyamkanhai stressed the importance of bamboos as an essential ingredient people use in day-to-day lives from birth till death for performing any ritual or ceremony.

On the other hand, Director of the National Bamboo Mission DD Haokip said climate and environment of Manipur is suitable for the growth of bamboos and the government is ready to provide the required technical support, capacity-building, skill development and financial assistance for more production to boost the state’s economy.

A rally was also held in Imphal to promote bamboo as part of the event while different products of bamboos like bicycle, furniture, electronic goods and other by-products were exhibited during the function wherein the dignitaries released a souvenir containing articles on increasing the awareness of bamboos globally.