Manipur doctor gets ‘Order of Rising Sun’ award from Japan 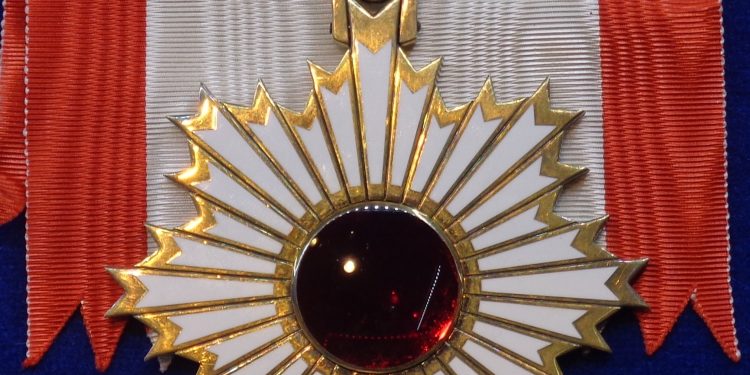 The Japan government has conferred the ‘Order of Rising Sun’ award on a Manipur physician for promoting a better understanding of Japan in India and deepening ties between the two countries.

The ‘Order of the Rising Sun’ is conferred on persons with achievements in international relations, promotion of Japanese culture, environmental preservation, welfare or achievements in their fields.

The award was constituted by Japanese Emperor Meiji in 1875.

Thangjam Dhabali Singh, a doctor by profession and founder of the Manipur Tourism Forum (MTF), was conferred the ‘Order of Rising Sun – Gold and Silver Rays’ by the Japan government on Wednesday, said a statement.

The Japan government conferred the decoration on Singh while announcing the names of the foreign recipients of the Spring Decoration, 2020, the statement said.

Singh had organised the 70th anniversary of the Battle of Imphal of the Second World War.

Several Japanese citizens, including officials from the Embassy of Japan in India, had participated in the event, it said.

“With support from the Sasakawa Peace Foundation and the Nippon Foundation of Japan, the Imphal Peace Foundation was launched on June 22 last year. The MTF played an important role in giving shape to it during Th Dhabali Singh’s tenure as president of the forum,” the statement added.

The Embassy of Japan in India has paid tributes to Singh’s long years of service in consolidating Japan-India relationship, it added.