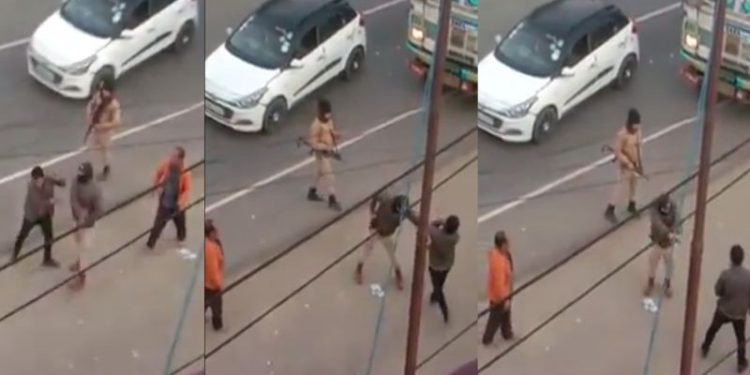 Screen grab of the video

A Manipur Police official was caught on camera mercilessly beating up a man in Kangpokpi district of the State on Tuesday.

The assistant sub-inspector was also seen threatening the man with a loaded gun.

The accused has been identified as ASI Th Hitler Singh of Kangpokpi Reserve Line DHQ.

He allegedly misbehaved with a truck driver from Senapati, while on duty.

The ASI was put under suspension with immediate effect until further notice, under Rule 66 of Assam Police manual part-III.

An order to this effect was issued by the superintendent of police, Kangpokpi district P H Maheshnarain.

The suspension order stated that ASI Th Hitler Singh’s behaviour was unbecoming of a member of a disciplined force like the Manipur Police.

The superintendent of police, Kanpokpi district has ordered that the ASI should not leave the HQ without permission from the SP.

Meanwhile, the Transporters’ and Drivers’ Council (TDC) has demanded termination of the unruly ASI’s service.

“We are not satisfied only with the suspension as it will be restored after sometime. Such ill-disciplined police personnel should be terminated from service,” TDC president H Ranjit told media persons.

Manipur Police took to Twitter to announce the suspension of the ASI.

In shocking video, the ASI is seen slapping and kicking a man… The police officer even used (loaded) his service pistol threatening to shoot the man.’