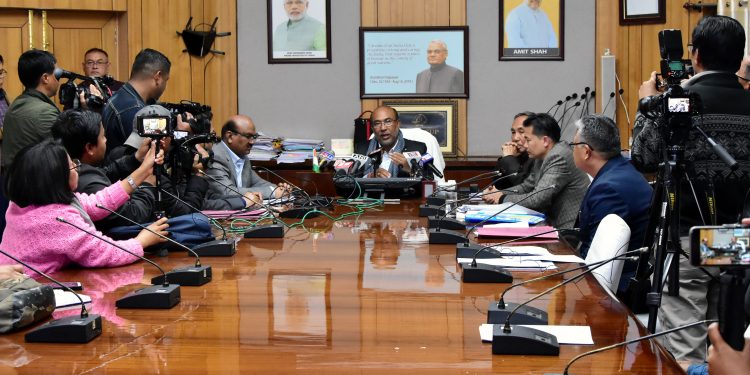 The Manipur Cabinet in a meeting held on Tuesday decided to open a sub-treasury office at Tadubi in Senapati district.

The Cabinet meeting was chaired by the state chief minister N Biren Singh.

Disclosing this to the reporters after the Cabinet meeting and subsequent event at Cabinet Hall of chief minister’s Secretariat in Imphal, N Biren said the meeting also decided to fill up the vacant posts numbering around 300 to 400 posts in various state government departments.

The Cabinet meeting also resolved to introduce cultural university and professional tax bills in the ensuing Assembly session which is scheduled to commence from February 14.

Speaking to media persons after the launching session, Biren said the introduction of the e-Kuber payment system in all the treasuries and sub-treasuries of the State will fully replace the existing payment system for the purpose of government payments.

Under this system, there will be no role of banks in government payments and RBI will act as the sole agency bank.

All government transactions for payment will be directly with RBI without any intermediary bank, he added.

It may be mentioned that the e-Kuber payment system was started on a pilot basis by the State Government at Imphal East Treasury from January 6 last.