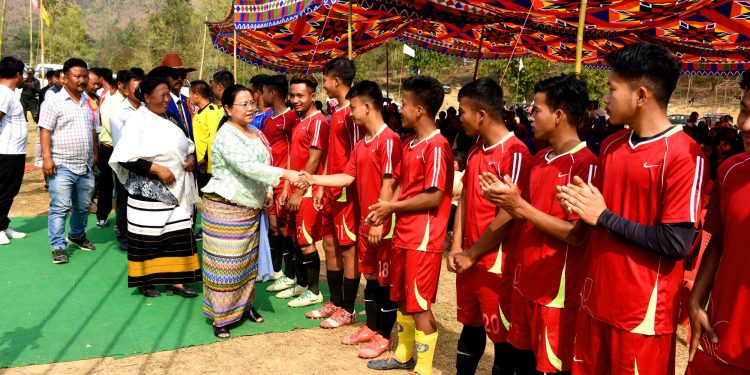 Speaking on the occasion, minister Nemcha Kipgen said peaceful co-existence amongst different communities will bring unity and peace coupled with inclusive development for all.

Kinpen said such sporting events bring the sense of unity and healthy competition as sports spreads the language of cooperation and understanding to all.

Nemcha, who hails from Kangpokpi district, also encouraged all to give maximum focus on education too as it is through the knowledge and wisdom gained from education that will shape the life of the youths to be a responsible citizen.

Pointing out the various illegal forms of plantations in the hill districts of the state, she also urged the people not to resort to such plantations or illegal practices that will degrade the lifestyle of the masses and that will also impact in the environmental conditions.Other district council members also spoke on the occasion.

N Mollen Youth Club were crowned the football champions after they beat Chungkholen Nemkholhing Memorial Team of B Geljang in the final match, said a statement of KSO Phailengmol Island Block.

N Mollen Youth Club on the other hand became the winners and Siloijang Youth Welfare Association finished runners up, it added.

Prior to attending the closing function of the sports meet, social welfare minister, also visited Ashiana, a Protective and Rehabilitative Home run under Ujjawala at K Themdoi Village, Kangpokpi wherein she interacted with the staffs and residents of the home.