In a move to know and understand the life and the work of filmmakers of Manipur, the Film Society of Manipur (FSM) is all set to organize the first-ever online celebration of Manipuri cinema from August 31 to September 26,2020, according to FSM sources.

Dr Makhonmani’s two award-winning films‘Chatledo Eidi (2000)’ and ‘Magi Matambakta (2018)’ will be available online for a week followed by a talk. 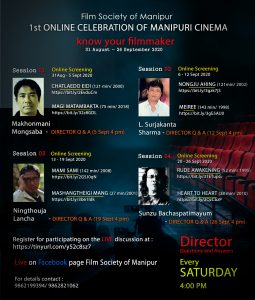 On the other hand Lancha’s fiction films – Nongdi Tarakkhidre (2003) and Illisa Amagi Mahao (2008) were selected for International Film Festival of India in Indian Panorama Section in the year 2004 and 2009 respectively.

On every Monday, two important works of a filmmaker will be made available online free for a week and exclusive live talk with the filmmaker at the weekend.

Any film enthusiast can take part in this event free with the registration in advance.

FSM earlier planned to conduct the event chronologically from the earliest film to the latest film of Manipuri cinema.

But due to non-availability of the films and poor archiving in the state the festival had to be deferred for almost a month.

It also invited everyone to check the FaceBook page of the Film Society of Manipur for the event.