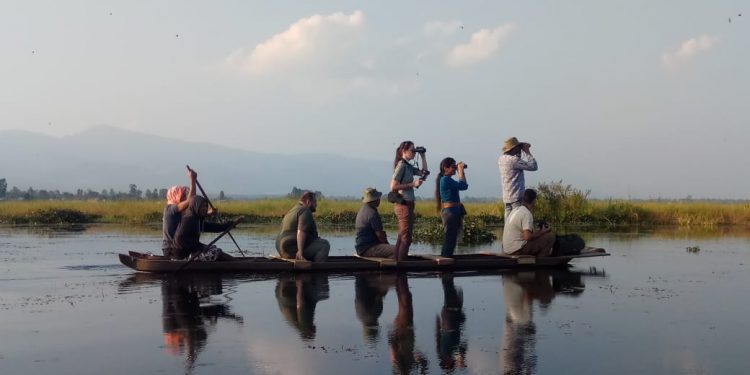 A committee in Manipur has appealed to people of the State which has a rich biodiversity to extend necessary cooperation and support in developing a bird sanctuary at Thingungei area in Manipur’s Bishnupur district.

In a press release, general secretary H Romio of United Committee Thingungei (UCT) said that proposed area, as per the government notification, is 103.10 hectares (1.031 sq km) which comprises of 13.93 hectares of swampy area, 35.37 hectares of floating biomass (phumdi) and 53.80 hectares of open water.

It said UCT which comprises of 13 clubs, association and Meira Paibi organizations was constituted, to assist in safeguarding and maintaining the bird sanctuary after Manipur government declared Thingungei side of Loktak Lake where migratory birds take shelter during winter as a bird sanctuary under the banner ‘Thingungei bird sanctuary’.

According to the release, the total state land in the eastern side of Thinungei adjoining Loktak Lake is about 84.3 hectares. Of which only 13.93 hectares is under the Bird Sanctuary and remaining 70.3 hectares is being encroached. Similarly there are also reports of encroachment in northern and southern side of the proposed sanctuary.

It said encroaching the shoreline area of the core zone of Loktak Lake, Ramsar Site, a wetland of International importance, is a total gross violation of the National Wetland (Conservation & Management) Rules, 2017 and Manipur Loktak Lake (Protection) Act, 2016.

It may be mentioned that a large number of migratory waterfowls have been visiting the Loktak Lake and its associated wetlands every year during winter.

Regarding the allegation of reduction of the fishing areas due to the proposed sanctuary, the release said this needs the intervention from state government.

Informing that the whole area of 103.10 hectares (1.031 sq km) is such a small area for a bird sanctuary, it also claimed that majority of villagers of Thinungei supports the establishment of bird sanctuary.

Stating that the proposed sanctuary will affect livelihoods of many villagers, the JAC functionary also suggested to organise more awareness programme villagers on wildlife and its laws etc.