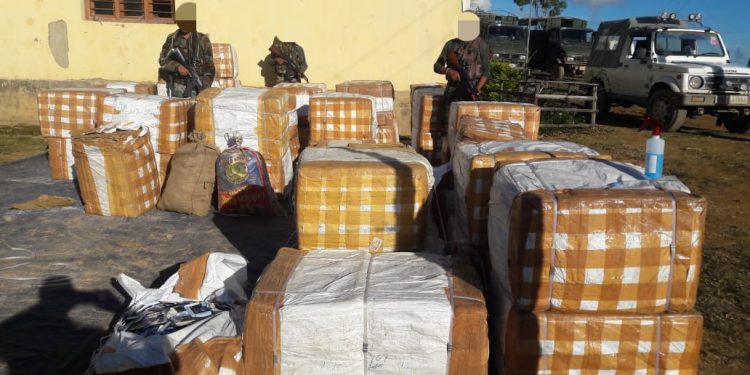 Troops of the Assam Rifles in Manipur recovered “smuggled medicines” worth around Rs 12 Lakhs during a checking.

In a statement to the media, Assam Rifles informed that based on the specific inputs on July 23 at around 6 am, troops of Assam Rifles activated the check-post at Bungdung in Kamjong District and at around 9 am two Shaktiman Trucks (MN 04A 1079) and (MN 03P 0696) moving from Imphal to Wanglee were stopped for checking.

On enquiry from drivers, they produced 14 Tax Invoices of drugs and medicines worth Rs 7,90,357.

The drivers Shanireingam and Varekam informed that they were going to cross the border into Myanmar near Wanglee village, the release said.

On detailed scrutiny of the invoice receipts, it was observed that the tax invoices are not stamped by an authorized seller and were fake.

Since no electricity was available at Kasom Khullen Police Station, physical verification of the recovered items was carried out at 11 am on July 24, 2020, in the presence of Assam Rifles troops and Police, the release stated.

The approximate value of the medicines was found to be Rs 12 Lakhs, which is more than the value of Rs 7.9 Lakhs as mentioned in the tax invoice.

The recovered medicines along with the Drivers and Co-drivers of the vehicles were handed over to Kasom Khullen Police Station for further legal actions, it added.