After Modi, Manipur’s climate activist now lashes out at Congress

Manipur’s climate activist Licypriya Kangujam, who had recently rejected Prime Minister Narendra Modi’s honour of joining the #SheInspiresUs campaign, lashed out at the Congress too after the party praised her for rejecting the Prime Minister’s offer.

“PM Modi’s lip service & hypocrisy towards women empowerment has been called out by the brave environmental activist, Licypriya Kangujam. After rejecting his offer, she reminded the PM that listening to her voice is more important than any Twitter campaign,” the Congress tweeted.

However, Kangujam later replied to Congress’s tweet and asked the party about the number of MPs willing to put up her demands in the Parliament in the ongoing session.

Also read:“Please don’t celebrate me if you are not going to listen my voice,” Manipur’s 8-year-old climate activist tells Modi 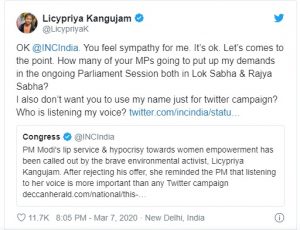 She tweeted, “OK @INCIndia. You feel sympathy for me. It’s ok. Let’s comes to the point. How many of your MPs going to put up my demands in the ongoing Parliament Session both in Lok Sabha & Rajya Sabha? I also don’t want you to use my name just for twitter campaign? Who is listening my voice?”

Soon after, Congress leader Shashi Tharoor replied to Kangujam’s tweet and mentioned the things the party is planning to do for air pollution.

Tharoor tweeted,”Dear Licypriya, your voice is ours too. For three years now I have been Convening a RoundTable on Air Pollution, calling for a National CleanAir Policy.

@incIndia held extensive consultations on the environment prior to the 2019 election; our stand is in our manifesto. We will!” 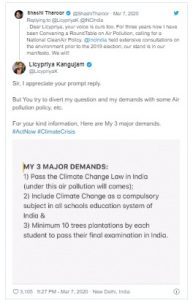 However, Tharoor’s tweet did not go down well with the child activist and she mentioned her three major demands through another tweet.

Kangujam’s three demands include passing of the climate change law in India, including climate change as a compulsory subject in all schools and plantation of a minimum number of ten trees by each student in order to pass their final examinations.

Tharoor later assured her that he is happy to support her demands and promised to try and raise the demands in parliament ‘at the earliest opportunity’.