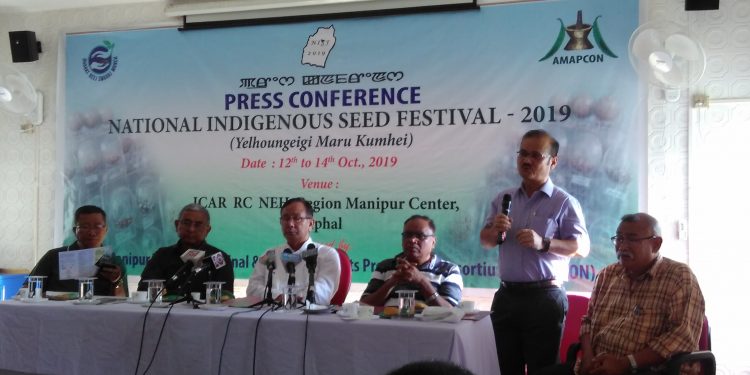 In a bid to conserve indigenous seed varieties and also to help secure genetic diversity for climate resilience, the first ever National Indigenous Seed Festival 2019 in northeast will be held in Imphal from October 12-14.

This was announced by Lok Sabha MP Dr R K Ranjan Singh who is the chairperson of the organizing committee of the festival during a press conference in Imphal on Wednesday afternoon.

The three-day festival will be organized by All Manipur Trained Medicinal and Aromatic Plants Promoters Consortium (AMAPCON) which had been conserving more than 300 indigenous seeds of rice, medicinal and aromatic plants including more than a dozen aromatic black rice species or ‘chak-hao’ in local tongue for the nation and human race, with technical support from Bharat Beej Swaraj Manch (India Seed Sovereignty Alliance) .

“The main objective of the festival is to exhibit the native indigenous seeds of different types of crops which were earlier used by our people before the modernization of agriculture,” says Dr Ranjan.

“This kind of native seeds has to be protected, preserved and promote because the gene will be used as an instrument to combat or to mitigate the failure of crops by climate change,” he added.

Stating that the target of the festival is also create awareness on native seeds and its promotion, he said, the idea is to take up steps to re-establish the then seed museum in the state.

So far 190 participants including 31 representatives including farmers from 13 states of the country have applied for their participation, co-chairperson RK Nimai of the organizing committee informed. The festival is for all the farmers in the state too.

Convenor P Devkanta who is also the president of AMAPCON also informed that more than two dozen native rice seeds not to speak of seeds of other medicinal and aromatic plants have been vanished from the region in the last 15 years due to various factors.

Thus conservation of indigenous seed varieties of the region is need of the hour for our future.