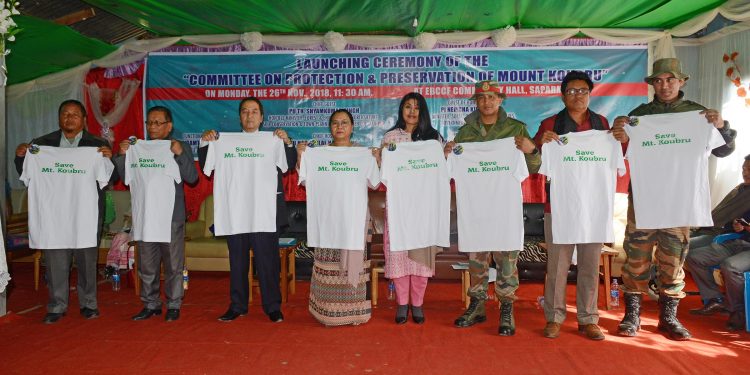 Manipur Social Welfare and Cooperation Minister Nemcha Kipgen on Monday launched the Committee on Protection & Preservation of Mount Koubru (COPPK) under the motto ‘Save Mt Koubru’ at a function held at EBCCF Community Hall of Saparmeina, around 30 km north of Imphal in Kangpokpi district.

Speaking on the occasion as chief guest, Minister Nemcha apprised about how essential Mount Koubru is for the state of Manipur and Kangpokpi district in particular, as it played a very significant socio-cultural and economic role for people residing in and around it.

She also expressed that though the mountain ranges have been abundantly providing various forest products and resources; unwanted intrusions and destructive activities are frequently reported.

The Minister stated that the emergence of such organizations to protect and preserve Mount Koubru is the need of the hour.

Nemcha further appealed to all to come forward and take the initiative to protect, preserve and save Mount Koubru in its natural state and maintain the ecological balance.

Only through the collective efforts of all, unwanted Intrusion to Mount Koubru can be stopped, she added.

While delivering the keynote address, advisor to COPPK, Tongmang Haokip pointed that the very objective and purpose of this committee was an attempt to check rampant destruction of the flora and fauna of the region.

He asserted that COPPK will spearhead the movement to educate the masses and spread awareness on how to restore back Mt Koubru to its originality and essence.