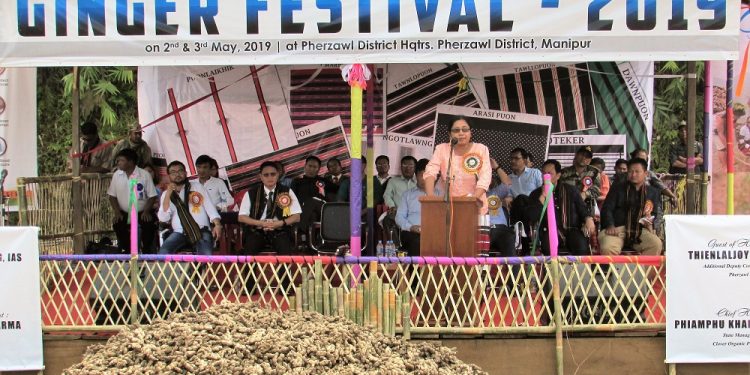 Speaking on the occasion, the deputy commissioner Mannuamching exhorted the farmers to judiciously use resources like forest and land while also dissuading the farmers from rampant use of chemicals like pesticides, weedicides and synthetic fertilizers. Steps in the right direction should be taken by all stakeholders to prevent wastages of labour and produces due to lack of good roads for transportation, she added.

Mannuamching further urged the farmers to opt for organic way of farming which will in the long run save the environment and enhanced fertility and productivity.

Expressing concern over the deteriorating environment condition due to unchecked use of forest and land, the deputy commissioner urged the gatherings to care and nurture their surroundings. She also exuded strong confidence that the festival helps farmers increase production and reaches out to a bigger market.The deputy commissioner along with other officials inspected the agro product exhibition stalls put up by various farmers drawn from different villages.

Speaking at the occasion, S ThienlaljoyGangte, additional deputy commissioner, Pherzawl emphasized about the need for proper financial management. He also urged the farmers to prepare their second line of income generation.

The deputy commissioner along with other officials inspected the agro product exhibition stalls put up by various farmers drawn from different villages. A free medical camp was organized on the sideline of the day’s function.

Presentation of colourful cultural items by troupes from surrounding villages and other mesmerizing items from prominent artistes marked the inaugural function. Business session and farmers’ consultative meeting will be held on Friday.