The NPP Chief was accompanied by Meghalaya PWD Minister Prestone Tynsong and Home Minister James K Sangma, who were also accorded a warm welcome and reception by the NPP leaders and party functionaries.

It was Conrad Sangma’s maiden visit to Manipur after assuming the office as Meghalaya Chief Minister on March 6. The overwhelmed party functionaries in Imphal honoured Chief Minister and his Cabinet colleagues Prestone Tynsong and James Sangma with rich traditional and cultural artifacts and paintings that portray the diverse and unique lifestyle of Manipur.

The leaders from Nagaland also honoured the Meghalaya Chief Minister and his Cabinet colleagues during the event, which saw a massive turnout of over 6000 plus strong contingent of party workers, leaders and NPP supporters, who chanted slogans – ‘NPP for united Northeast’.

A grand cultural show was presented in honour of the Chief Minister as the party functionaries rejoiced NPP’s government formation in Meghalaya. 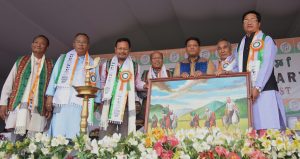 Speaking on the occasion, Conrad Sangma thanked the people of Manipur for the honour. He expressed confidence that NPP’s surge in Northeast will further grow, as people have understood that NPP is a party that is committed for the common good of the people of the Northeast.

“We may have difference and our own priorities but NPP believes that we can bring the people of Northeast together. Today in this programme we have a Khasi leader wearing a Naga jacket and a Garo leader wearing a Kuki jacket. We will always want to fight for our rights but our similarities binds us together. NPP can provide a platform for our people in Northeast to raise their voice and concerns that affects us. I believe that we can take Northeast forward”, said Conrad Sangma.