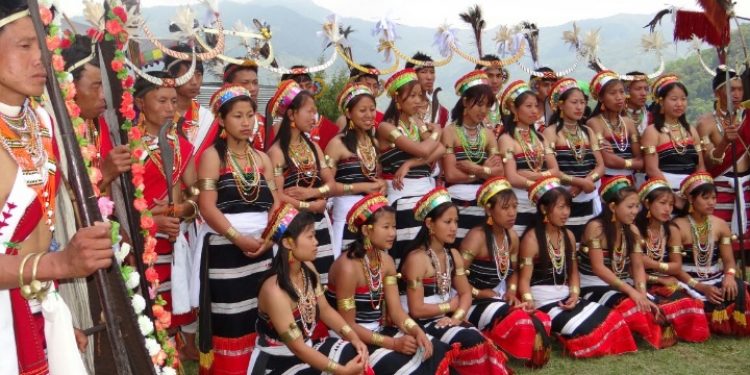 The Inpui Nagas in their traditional attires. Photo: Northeast Now

Inpui Nagas have their own story of origin. The genesis of Inpuis clearly stated that Inpuirwan emerged out of a cave called ‘Ramting Kabin’ (a place where stars can be seen in day light), after breaking the door Kapo Inkhaan’ which blocked their way to go outside into the wide open spaces with the help of Sentak (mithun).

The majority of the Inpui Nagas have settled in Haochong sub-division of Tamenglong district and Senapati district like the Waphong Inthan village, Makuilongdi village and Senapati headquarter of Manipur.

Some of the Inpui Nagas have also settled in Nagaland in places like Sangtamtila Dimapur and also at different parts of the country.

Same clans were not allowed to get married and prohibited from indulging in any kind of romantic relationships.

The Inpui Nagas are cheerful and merry making people and lovers of festivals.

They observe several festivals throughout the year. Some of the popular festivals of the Inpui Nagas tribe are:

Karing-Ngei which means ‘Festival of Living’ is celebrated in the month of January every year and one of the biggest festivals of the Inpui Nagas.

It is more or less a celebration honouring the ancestors and village champions who had sacrificed their lives in protecting the villagers against the enemies.

This festival is particularly celebrated by the men folk. They make a figure of a man with plantain and throw javelin at it which is known as ‘Tabaan khwanu’.

If anyone strikes the head, he is considered to have killed an enemy. If he strikes the stomach, he is believed to have been blessed with plenty of food.

It is also celebrated to showcase the culture, tradition and strength of the Inpui Nagas.

Tataaknu is another festival celebrated in the month of December. It is a parting festival between the living beings and the souls of the death.

This festival is the new year festival for them as they begin new life after it. During this festival they offer food complete with several ethnic dishes to the dead ones, because they believe spirits come to have the food.

Nabitnu, the festival which means ‘piercing of the ears’ falls in the month of March, but with the advent of modernity brought in by Christianity, this festival is now solemnized in the month of December during Christmas day.

It is the celebration of piercing the ears of the babies where ears of those infants born after the last festival are pierced.

They also offering of gratitude to the mother goddess and seek her blessings.

Another festival called, Ba-Ngeipui is celebrated in the month of September every year after ‘Loumainu’ (weeding) in the fields.

Both men and women form groups and collect money to celebrate this festival – it’s a celebration of overcoming the obstacles and pains during weeding for cultivating their produces.

The last but not the least is the festival of Muiliangnu. This festival is celebrated for assessing the agricultural products collected by each household of the village.

It is celebrated in the first part of November and December. Most of these festivals revolve around agriculture.

Agriculture traditionally is not merely a means of living, but also a way of life.

The elders choose two families from their village who had harvested more than that of the other families.

They are given the first (Bapui) and second (Baswan) positions. The entire villagers would gather in the ‘Bapui’ family and bless the family in the morning and the same rituals are done at the ‘Baswan’ family in the evening.

Both the households would offer whatever they have to the villagers and seek blessings and wisdom from the elders and the villagers in general.