Dr Badal was honoured for his extensive studies on bio-ecology and management of a white grub species, lepidiota mansuetaendemic in Majuli river island 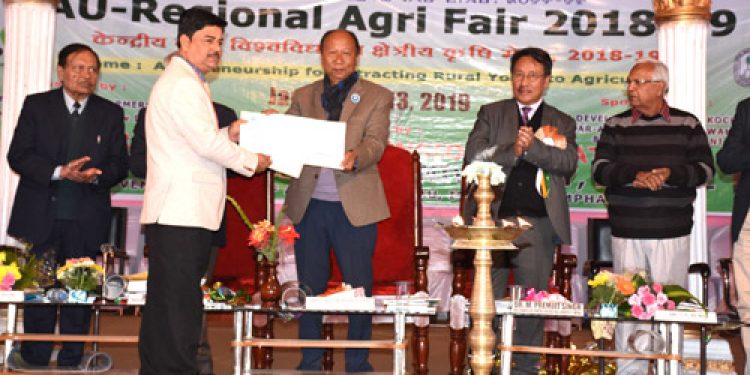 A scientist from Assam was awarded Dr HK Jain – Central Agricultural University(CAU) Award for Excellence in Agricultural Research in Imphal.

The award which carries a gold medal and a cash prize of Rs 1 lakh was conferred by Manipur assembly speaker Yumnam Khemchand Singh during the inaugural function of the 12th edition of the Agri Fair at CAU campus Eroishemba in Imphal.

Dr Badal was honoured for his extensive studies on bio-ecology and management of a white grub species, lepidiota mansuetaendemic in Majuli river island of Assam.

He has successfully introduced the unique “social engineering concept” for the management of the white grub beetle in Majuli which is one of the largest river island in the world, leading to massive collection and killing of more than 9 lakh beetles during 2010-2018 resulting in the tremendous impact in enhancing crop productivity and improving both livelihood and nutritional security of the river island.

Besides identifying eight pheromoval compounds, he has made remarkable efforts to convert this insect pest into a cuisine as edible insect to promote entomophagy.

His research on the menacing pest was nationally recognized by India council of agricultural research New Delhi by bestowing on him the prestigious “Fakhruddin Ali Ahmed Award” for the outstanding research in tribal farming system” in 2014.

Under his leadership, a hundred farmers of Majuli island recently made history by setting a national record of most beetles collected in three hours in Indian Book of Records by collecting 73,700 numbers of white grub beetles on April 9-11 last year from Mahanchuk village in Majuli and the achievement glorified Assam Agriculture University Jorhat by making it the first ever agricultural university to have entered the India Book of Records.