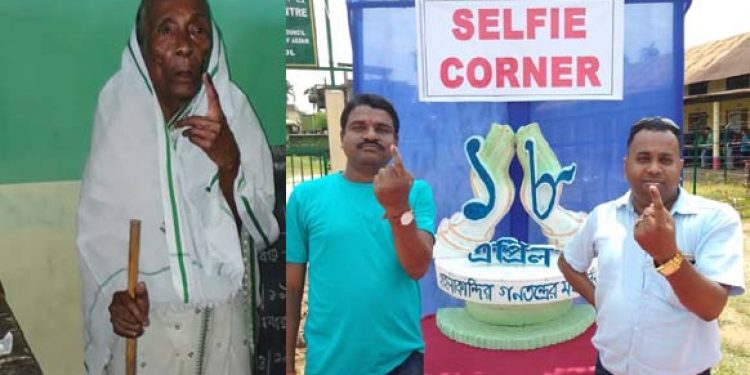 Voters after exercising their franchise in Hailakandi on Thursday. Image - Northeast Now

In the second phase of Lok Sabha elections to Karimganj parliamentary seat, Hailakandi district on Thursday recorded over 71 per cent voter turnout.

According to information, the three LACs namely 6 Hailakandi, 7 Katlicherra and 8 Algapur that fall under HP 1 Karimganj (SC) parliamentary constituency recorded an overall 71.45 per cent voting.

However, the exact figure is yet to come and the turnout is expected to rise as the polling teams from remote areas are on their way back.

Due to ‘SVEEP’ing initiatives the turnout of women and young voters were higher this time than compared to previous elections.

The administration had taken a slew of steps to provide facilities to persons with disabilities (PwDs) and to elderly and senior citizens, including transportation. ICDS volunteers came out to extend a helping hand to the disabled voters to cast their franchise without facing any difficulty. The administration also set up model polling station with selfie corner for anyone to strike a pose after casting his or her vote.

Barring a minor incident at Lakshmisahar Govt Basic School under 6 Hailakandi LAC, where supporters belonging to two rival parties tried to make an attempt at booth capturing but failed due to timely intervention of police and security personnel, the polling was by and large peaceful.

Meanwhile, an FIR has been lodged by the sector officer at the Hailakandi Sadar Police Station in this regard.

Presiding officer Basir Ahmed Barbhuiya said polling inside the booth went on without any hiccups, as the security personnel took total control of the situation.

Polling started at 7 am under tight security arrangements, and ended at 5 pm.

Reserved EVMs and VVPATs were kept handy in case of replacement at the quickest possible time by the 93 magistrates assigned for the task.

Keeping the ground situation in mind, 200 polling stations in the district were declared as vulnerable and critical.

Adequate deployment of police and central paramilitary forces were made to ensure a peaceful polling process.

“We thank the voters for coming out to vote in significant numbers. We would also like to thank the polling personnel, the Assam Police personnel, security forces for their support to ensure smooth polling,” Jalli said.