Call to promulgate gazette notification of Foreigners’ Act in Assam 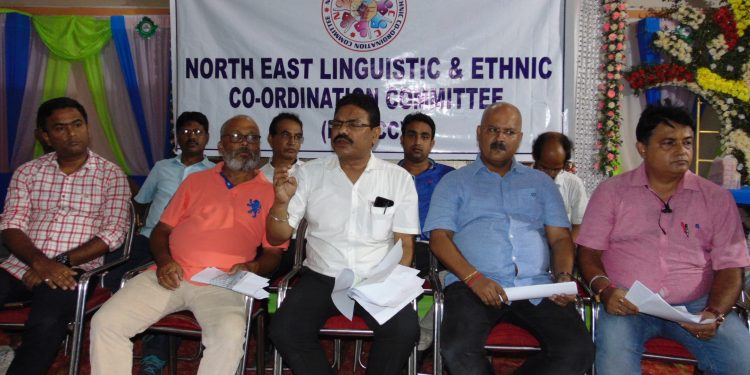 The North East Linguistic and Ethnic Co-ordination Committee (NELECC) has pressed for implementation of the gazette notification issued by the Government of India on September 7, 2015.

The gazette notification of the Foreigners’ Act promises security to the persecuted persons coming to this country.

The demand came following the exclusion of 19,06,657 people from the recently published final list of National Register of Citizens (NRC)

The NELECC leadership said that the notification issued by the Government on August 5 this year regarding the removal of the controversial Article 370 and Article 35A from Jammu and Kashmir which can come into effect immediately.

“This is an error-filled NRC and certainly not an error-free NRC list as promised by the authorities. Many genuine Indian citizens have been left out,” said Konkan Narayan Sikdar. Gen Secy of NELECC.

Konkan Narayan Sikdar, informed, “Out of the 19 lakh names that are excluded from the NRC list, 13 lakh names are of persecuted religious minorities.”

Sikdar added, “Last year, during Durga Puja we have made Prateek Hajela as an ‘asur’, a demon, which had a great impact. Don’t know as to what we would make of him now for the NRC list that he has come out with is filled with mistakes and genuine names have been left out.”

“Four years since the September 7 notification, there has been no action to implement the notification in the state while people are facing with immense trauma over the years,” Vivek Poddar said.

“We strongly demand that the Government must take steps to make the notification operational within September 22 this year or else we shall resort to massive agitation and even seek legal course of action,” added Poddar.

NELECC’s advisor, Subrangshu Sekhar Bhattacharjee, said, “People now have their backs to the wall and the consequences of the movement could be devastating.”

“We have reiterated these issues before the Chief Minister of Assam Sarbananda Sonowal when we visited him on 27th August, last,” he added.

Chief advisor and an advocate, Santanu Naik, said, “NELECC’s team members are once again heading for Delhi wherein we would meet union home minister Amit Shah and apprise him of our concerns.”