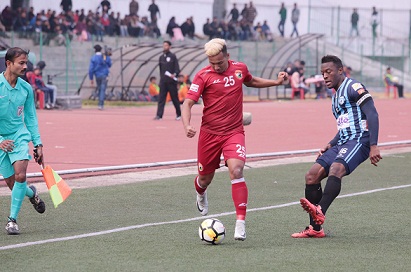 William Opoku Asiedu dashed Shillong Lajong FC’s hope to stop the Minerva juggernaut on Sunday at the Nehru Stadium in Shillong. The lone goal of the match in the 57th minute continued Minerva Punjab’s dream run in the I-League.

The Reds made one change in their starting line-up as central defender Laurence Doe was declared fit for the match and replaced young Kynsailang Khongsit. Right from the kickoff Lajong started playing attacking football and managed to win a corner at the very first minute. It was Aiman who found himself one on one with the Minerva keeper and but failed to send the ball to the net as he shot it straight to the hands of the keeper.

Minerva’s counter attack in the first half was foiled by Lajong defence. Led by Laurence, Lajong defence was at their best in Sunday’s match.

In the second half Aiman’s absence due to injury put Lajong in trouble. The visitor started creating several chances and in the 57th Ghanaian Willaim Okopu scored the only goal of the game.

Lajong, thereafter, went all out on attack looking for an equalizer after conceding the goal.  Samuel Lalmuanpuia dribbled past few Minerva defenders down the right flank and crossed one to the near post which was met perfectly by incoming Koffi but the Minerva keeper was again there to deny the hosts.

In the extra minutes of the match after the regulation time Lajong captain Samuel swung one in from the left corner only to be cleared away by the Minerva defence as the visitors ended up with three points with the victory.

Shillong Lajong will now travel to Goa to take on Churchill Brothers FC on January 19.