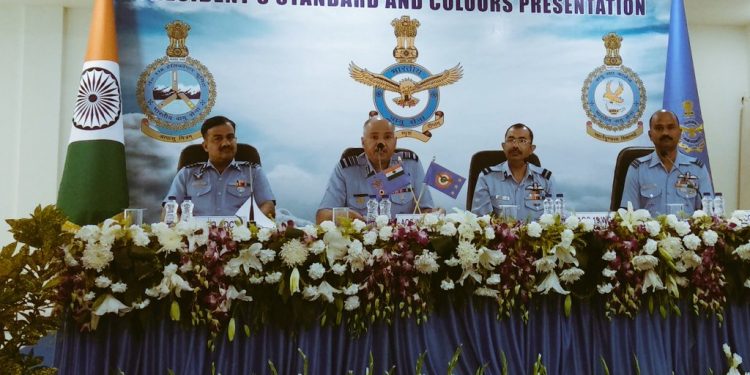 AOC-in-C of the Eastern Air Command Air Marshal Raghunath Nambiar and other AIF officials at the press conference in Guwahati on Monday.

The President’s Standard and Colours are the highest honour bestowed on units of the armed forces in recognition of their invaluable contribution to the security of the nation during peace and hostilities.

The 118 helicopter Unit (Challengers) is a Helicopter Unit and is equipped with Mi-8 and based at Guwahati Air Force Station under Eastern Air Command. It was raised at Chabua on November 22, 1971, Air Marshal Nambiar informed.

On the other hand, Air Defence College (ADC) is premier training institute of Indian Air Force and is located at Air Force Station, Memaura.

The college is the country’s only centre imparting advance training to fighter controllers of the Air Force. It was established in 1958 at Jodhpur as the Control & Reporting (C & R) School.

“Selection for award of Presidential Colour in year 2018 is momentous, as it coincides with Diamond Jubilee Yeas of ADC-a befitting acknowledgement of its glorious 60 years service, directly contributing to Air Defence of the county,” he added.