The Kohima Village Council (KVC) on Tuesday informed that it has decided not to participate in either of the centenary celebrations for the Naga Club, scheduled to be conducted separately by the Naga Students’ Federation (NSF) and the Naga Club.

A press release issued to the media stated that a decision in this regard was taken at a meeting held on Monday, which included the descendents of eight signatories of the Memorandum to the Simon Commission from Kohima Village.

The press statement issued by KVC chairman, Dr Neiphi Kire and secretary, Zeneizo Rutsa further stated that a resolution was taken that the ‘history of the Naga Club must be factually recorded for posterity’.

The KVC said that there is an ‘erroneous understanding’ that the Naga Club was formed by Nagas who were in the Labour Corps and fought in World War 1 (1914-1918). 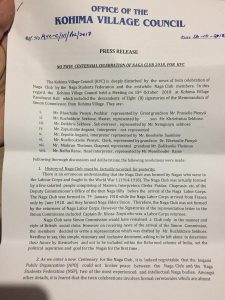 Instead, it stated that the Naga Club was ‘actually formed by a few salaried people comprising of masters, interpreters, clerks of the Deputy Commissioner’s Office of the then Naga Hills before the arrival of the Naga Labour Corps’.

“As we enter a new Centenary for the Naga Club, it is indeed regrettable that the Angami Public Organization (APO) could not broker peace between the Naga Club and the Naga Students Federation (NSF), two of the most experienced and intellectual Naga bodies,” the KVC lamented.

It informed that the twin celebrations involve formal ceremonies ‘which are almost replications of each other including unveiling of respective monoliths to mark the momentous occasion’.

“The very act of commemorating 100 years of Naga Club by erecting two monoliths makes a mockery of the vision of the Naga Club and also diminishes the solemnity of the occasion,” the KVC statement further added.