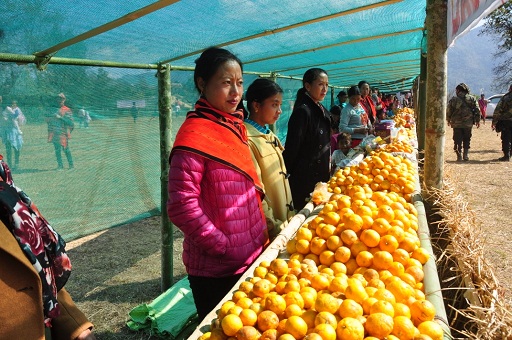 The festival is organised by Kachai Fruit Farming & Processing Cooperative Society Ltd and will conclude on January 20.

Speaking on the occasion minister Shyamkumar announced that the department would provide Rs 24 lakh for construction of a rural market shed and a retail market at Kachai village in Ukhrul district.

He assured that the fund would be handed over to the organising committee of the festival at the earliest so that the markets can be completed as soon as possible.

He further announced that the Forest Department will soon start a monetary assistance scheme to villagers for preservation of trees. The scheme is likely to be initiated by March.

Acknowledging that lemons of Kachai has popularised the village, he said after visiting the village he has the first hand knowledge of all the problems faced by the villagers.

He assured the villagers that he along with experts and officials of department will inspect the problems of the people by personally visiting them on the spot. He also assured that he would help in providing hard working farmers loans within 10 days in collaboration with banks but he stressed on the need of repaying the loans on time.

Praising the Tangkhul villagers for wearing and showcasing their traditional attires, he said preserving our traditional culture is a must. He said the demands for construction of Kachai Shanoulong office will be fulfilled along with construction of a polyhouse as submitted in the memorandum by the villagers.

On the other hand, farmers recounted their success stories. One of the farmers recounted problem he faced during transportation of the lemons to Imphal. Farmers appealed to the state government to help in providing monetary help and modern technologies.

Cultural and entertainment programme including famous Hoomi dance enthralled the crowd during the inauguration of the festival which was participated by around 147 stalls displaying the best lemons cultivated in the village.