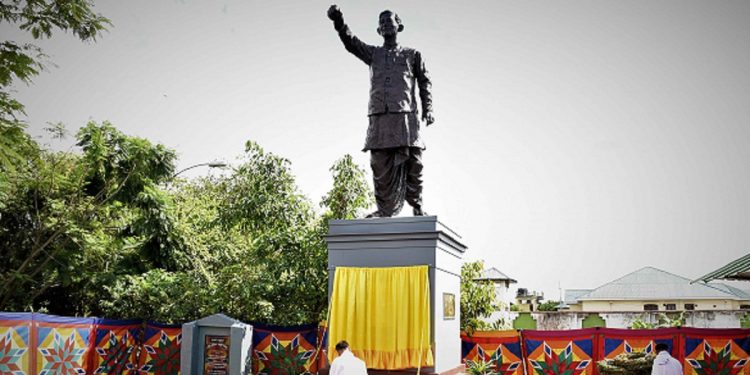 He accompanied by deputy CM, minister Dikho, MLAs and top officials led the gathering in offering floral tribute to the newly unveiled statue with guard of honours from Manipur Rifles personnel.

Speaking on occasion, chief minister Biren urged the public to follow the ideals of the great leader, who envisioned a united Manipur.

He also called upon the masses to remember Irawat’s dedication and efforts toward maintaining oneness and emotional integrity among people of different communities.

He said that paying homage and celebrating Irabot’s birth anniversary would be meaningful only when the current generation follows his ideals and translate his philosophies into action.

The chief minister appealed the general public to participate in this place for celebration of Irabot day in the years to come.

Stating that the the current government does not believe in rhetorical speeches but in visible actions, he informed his government has taken up certain measures to preserve the agriculture land and amended building by-laws since the agricultural land is very limited in the State.

He added a project proposal of minor irrigation and rain harvesting scheme has been sent to the concerned ministry to enable double cropping in the State.

Sharing his view during the gathering, deputy chief minister Joykumar remembered Irabot as an important leader and highlighted Irabot’s contribution in the fields of literature, sports and social uplift of the downtrodden.

Some of the organizations also paid floral tribute at the statue of Irawat at Pishum Oinam Leikai area, the birth place of the social activist located in the Imphal West district.

Many local clubs also observed the day at their localities by conducting cleanliness drive and illuminating the streets in their respective areas as part of paying homage to the great leader.