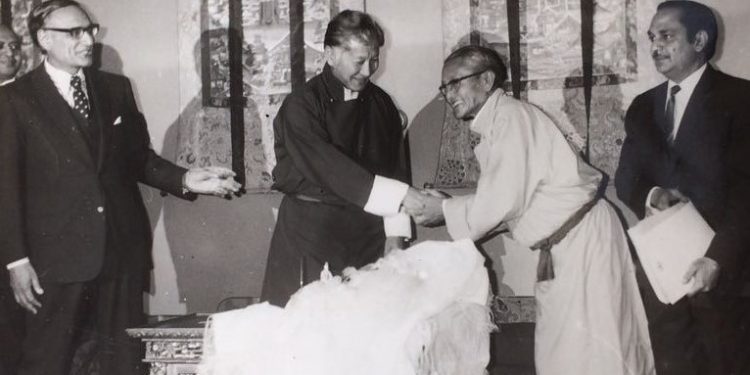 The merger of the erstwhile Himalayan kingdom of Sikkim into India in May 1975 was the result of a top secret operation by India’s external intelligence agency, Research & Analysis Wing (R&AW), says a book by a retired senior official who was involved in it.

“Sikkim Dawn of Democracy: The Truth behind the Merger with India” authored by G B S Sidhu and published by Penguins, provided graphic details about how the operation was initiated in February 1973 by the R&AW’s founder chief Rameshwar Nath Kao after then Prime Minister Indira Gandhi asked him to work for bringing Sikkim within the Indian fold.

After its decisive military intervention to liberate Bangladesh in 1971, India had to reckon with considerable Chinese hostility and US opposition and so keeping the Sikkim operation a closely guarded secret held the key to its success, Sidhu told the Diplomat in an interview.

India’s former foreign secretary and National Security Adviser Shiv Shanker Menon describes Sidhu’s book as a ‘rarity’ because “it is an account by an intelligence insider who participated in and shaped the events that he recounts.”

Describing Sikkim’s merger with India as a “momentous event in the annals of modern Indian statecraft”, Menon commends Sidhu’s book for “setting the record straight”.

“The merger of Sikkim has been under-analysed or misinterpreted in previous accounts that drew upon partial or one-sided sources,” says Menon. “This book makes clear the reality and truth often outstrips imagination and analysis.”

Until its merger with India, Sikkim, an Indian protectorate, was a kingdom ruled by the Chogyal

Books on Sikkim’s merger with India have either accused India of outright annexation or treated it as the inevitable fallout of the pro-democracy movement in the kingdom.

But Sidhu, a former special secretary of R&AW and its station chief in Sikkim capital Gangtok in the months leading to the merger, provides details about the neatly phased and calibrated operations run by a three member special operations team functioning under guidance of R&AW’s then chief R.N Kao and its eastern regional director P.N. Banerjee.

“The operation was so secret that its ultimate objective of merging Sikkim with India was known only to three officials – Kao, Banerjee and myself,” claims Sidhu.

The two other R&AW officers in the special team – Padam Bahadur Pradhan and Myngma Tshering – were only briefed about the next phase of the operation when one phase was over, he says.

Sidhu told Northeast Now that Sikkim’s merger stabilised India’s control over its disputed Himalayan borders with China as its ‘weakest point’, much as India’s military intervention in 1971 had created a friendly neighbour.

“The geopolitical significance of both the liberation of Bangladesh and the merger of Sikkim with India is enormous, as it made India the undisputed prima donna in South Asia,” says political scientist Sabyasachi Basu Raychowdhuri.

Independent India had overlooked the pro-democracy movement in Sikkim since Independence and let the monarchy function until late in 1972.

But that changed in late 1972 when the Chogyal refused the Indian offer of Permanent Association unless Sikkim was accorded full sovereign rights, says Sidhu. “Due to India’s strategic interests in Sikkim, it could not have agreed to Sikkim entering the arrangement with full sovereign rights”

Prime Minister Indira Gandhi called Kao and her Principal Secretary P N Haksar to her office sometime in December 1972 and asked Kao if ‘something could be done about Sikkim,’ says the book.   Kao promised to get back within a fortnight and the Chogyal’s insistence on full sovereign rights led to “a 180-degree turnaround in India’s policy towards Sikkim.”

Sidhu provide details about how the pro-democracy political parties, specially the Sikkim National Congress (SNC), were funded and micro-managed to intensify their agitation for abolition of monarchy without disclosure of India’s ultimate objective.

“Only  SNC chief Kazi Lhendhup Dorji was taken into confidence because we trusted he would not spill the beans,” says Sidhu . “The other politicians, many of whom were manipulated by the Chogyal, were slowly won over to the cause.”

Sidhu says that once the message that India would no longer back the palace became clear, the political parties intensified their movement and India used it to push the Chogyal to give greater powers to the state assembly  and the administration of the kingdom was effectively taken over by Indian officials.  The empowered assembly then resolved to join India and a referendum put the seal of popular approval for the merger.

“It was a brilliantly phased and calibrated operation that unfolded behind the cover of the pro-democracy agitation and was so different from the Chinese military takeover of Tibet or the recent Russian takeover of Crimea,” says former R&AW official  Rana Banerjee ,who recently headed a committee on intelligence reforms.

He says that the Sikkim operation was marked by an absence of force which usually accompanies such takeovers of smaller nations by bigger ones.

“So it will be unfair to call it annexation, as we just used popular feelings to achieve our objective through a political operation in which the military option was hardly exercised,” Sidhu told Northeast Now.

The only time the Indian army was used was to disarm the pro-monarch Sikkim Guards in April 1975 just before the state assembly was to move the final resolution for merger with India – and that because “we were told they would intervene to block the resolution and could even assassinate some pro-democracy leaders on orders from the Chogyal,”  said Sidhu.

“This account is based on a diary the author meticulously maintained and some archival sources of the Ministry of External Affairs and the Prime Minister’s office,” says former R&AW chief Vikram Sood .

“The result is an excellent book that should now be essential reading for all those interested in the history of post-Independence India.”