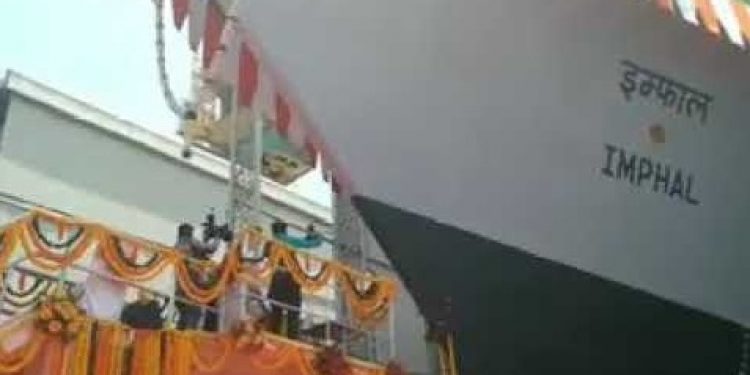 As per maritime traditions, Reena Lanba, wife of Navy Chief Admiral Sunil Lanba named the ship and broke a coconut on the 3,037 tonnes ship’s bow prior to the launch amidst invocations from the Atharvaveda.

The ship is the third in the Project 15B vessels – the earlier ones launched are ‘Vishakhapatnam’ (2015) and ‘Murmagoa’ in 2016 – which feature cutting edge advanced technology and are comparable to ships of similar class anywhere globally.

Designed by the Indian Navy’s Directorate of Naval Design, each ship spans 163 metres long and 17.4 metres at beam and displaced 7,300 tonnes. They are propelled by four gas turbines to achieve speeds in excess of 30 knots.

The P15B destroyers incorporate new design concepts for improved survivability, sea keeping, stealth and manoeuvrability, besides carrying and operate two multiple role helicopters. Enhanced stealth features are been achieved through shaping the hull and use of radar transparent deck fitting which makes them difficult to detect by the enemy.

The ships are packed with an array of state-of-the-art weapons and sensors, including multi-functional surveillance radars and vertically launched missile system for long distance engagement of shore, sea-based and air targets, said a defence official.

The three warships – ‘Vishakhapatnam’, ‘Murmogoa’ and ‘Imphal’ will be commissioned into the Indian Navy from 2021 onwards.