Hynñiewtrep Youth Council activists storming premises of Meghalaya secretariat to press for their demand before government to conduct NRC and ILP on August 3, 2018. Photo: Northeast Now

In a security breach that caught police personnel unaware, Hynñiewtrep Youth Council activists stormed the premises of the Meghalaya secretariat on Friday to air their demand before the Meghalaya government to conduct the National Register of Citizens in the state and implement inner line permit (ILP) to check influx.

Carrying placards demanding NRC exercise and implementation of ILP in the state, the HYC entered as normal visitors to secretariat one after the other in order to keep security personnel off guard.

Later the activists managed to gather in the main secretariat premises along with placards and shouted slogans.

The embarrassed police personnel then rushed to the main secretariat to chase the protesters and warned of arresting them if they continue their protest within the secretariat premises.

After dispersing, the protesters in hundreds of them assembled at the parking lot near Additional Secretariat.

The Chief Minister, Conrad K Sangma, Home Minister, James K Sangma and other ministers were not in office when the protesters came to the secretariat premises.

Friday’s protest was the second incident where protesters had managed to enter the secretariat premises despite the presence of security personnel.

On June 4, a group of hawkers had also barged the secretariat premises while the protest over the Them ïew Mawlong issue was going on at Motphran area. That time, the protesters managed to meet the Chief Minister.

HYC general secretary, R Kupar Synrem said that such anger should be shown in order to wake up any “sleeping government” and consider seriously the demands for introduction of ILP and conduct of NRC to detect illegal immigrants in the state. 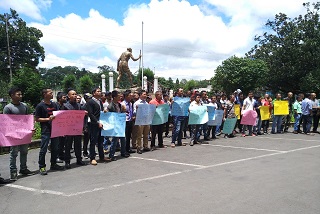 On the proposed setting up of entry and exit points to address influx problem in Meghalaya, the HYC leader said such mechanism will not be able to prevent illegal Bangladeshi immigrants from entering Meghalaya.

“At the entry points, the authorities will only ask for the EPIC (electoral photo identity card) of the persons who come to our state. But what we have seen in Assam was those who have EPIC did not figure their names in NRC. Therefore, those 40 lakh plus persons who have been left out of the NRC list are having EPIC and they may move out of Assam and settle in Meghalaya and other neighbouring states by showing their EPIC,” Synrem opined.

Synrem also said that if the Citizenship (Amendment) Bill, 2016 is passed, most Hindu Bangladeshis will also seek refuge in India.

“This is a threat as the indigenous people of Meghalaya will be outnumbered,” he said, adding that Inner Line Permit is the only mechanism that can curb unabated influx into Meghalaya.

East Khasi Hills Superintendent of Police, Davis NR Marak admitted that there was no information about the coming of the protesters to the main secretariat which was a breach of security most probably due to intelligence failure.

“We got the information only after these people have congregated. The protesters gradually were entering the secretariat premises like normal visitors one after another and they did not come in a group. Later they suddenly started gathering and took out placards in the premises,” he said.