The NELECC staged a protest in Silchar demanding the implementation of the Gazette notification issued by the government on September 7, 2015 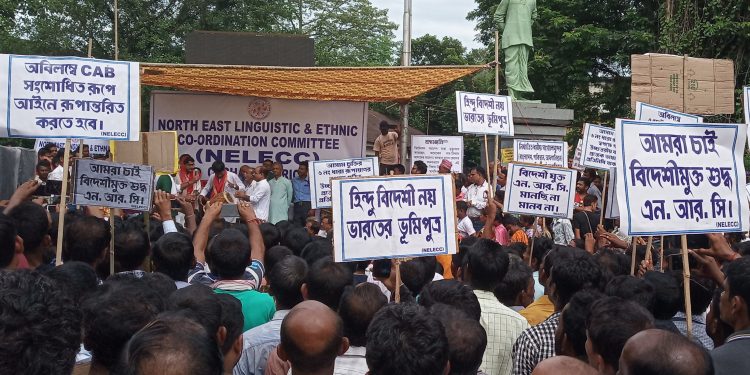 The activists of NELECC staging a protest in Silchar on Tuesday.

The Northeast Linguistic & Ethnic Coordination Committee (NELECC) on Tuesday said Hindus are not foreigners and are indigenous inhabitants of India.

The activists of the NELECC staged a protest in Silchar demanding the implementation of the Gazette notification issued by the government on September 7, 2015.

Bringing the Club road and Office Para area of Silchar town to a standstill, around 1000 protestors blocked the roads and staged protests near Khudiram Bose statue chanting slogans against the state as well as the central governments for ‘putting the life of the people at stake’.

Hundreds of protesters holding placards in their hands expressed their anger against the NRC and demanded immediate implementation of the gazette notification.

The notification allows Hindus, Sikhs, Buddhists, Jains, Parsis and Christians coming from Bangladesh or Pakistan due to religious persecution to Assam.

“Hindus are not foreigners and are indigenous inhabitants of India”, “We want a foreigner-free NRC”, “CAB to be passed with requisite amendments”, “Hindus in detention camps to be released immediately”, “Don’t accept any sort of protection under Schedule 6 of Assam Accord,” the read the placards.

“For the past one and a half years, we have approached all corridors of power, be it in Dispur or in Delhi, only to find that the NRC final list that was released recently is full of anomalies and completely bogus,” Vivek Poddar, convener of NELECC told Northeast Now.

“After seeing that the whole NRC process is a bogus one, NELECC decided for not finding any other way out, to come to the streets and raise their voices against such gross anomalies that is playing with the lives of innocent genuine citizens of India.”

Subhrangshu Sekhar Bhattacharjee, another Convener of NELECC, informed this correspondent that a similar protest rally was also held at Hailakandi and Karimganj town on Tuesday to garner more support for the demands that they have placed before the governments.

“The Gazette Notification dated September 7, 2015, allows any persecuted minorities to come to India from Bangladesh and Pakistan, even without having any valid documents or passports, but in Assam it has not yet been implemented. Such people have been sent to detention camps branding them as foreigners.”

“If the Article 370 can be abrogated in a day, why a Gazette Notification that is valid throughout the country, cannot be implemented in Assam,” said Bhattacharjee.