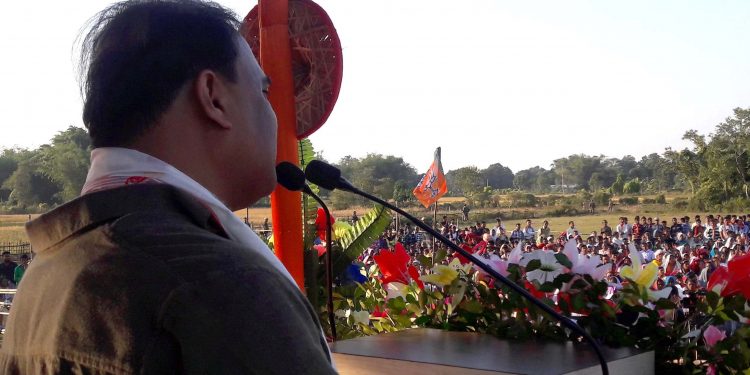 Assam Finance Minister Himanta Biswa Sarma on Friday went hammer and tongs at the AGP, Congress as well as the Jamiat Ulema-e-Hind president Arshad Madani during a panchayat election campaign at Teok Legislative Assembly, which is known as an AGP bastion.

Addressing a gathering at the Rajabari playground at Teok, Sarma said that these days the AGP was seen to be backed by Na Axomiya, literally new Assamese people, meaning migrants, whereas the BJP was backed by the indigenous Assamese people.

The Teok constituency is represented by AGP’s Renupoma Rajkhowa, who is also the former Speaker of the state Assembly.

Sarma said that BJP was committed to take the state forward by stressing on the progress of the Tiwa’s,  Mising,  Moran,  Motok,  Sonowal and Karbis.

In another meeting in upper Assam, Sarma had lambasted the AGP blaming them for permitting 50 lakh migrants to gain citizenship by accepting March 24, 1971 as the cut off date when they as student leaders spearheading the Assam Agitation signed the Assam Accord in 1985 without taking cognizance that in 1951 the National Register of Citizens (NRC) had been prepared.

Regarding the Congress, he said that they only paid lip service to women’s empowerment by invoking the names of Sati Sadhoni and Kanaklata, but real empowerment was being brought about by the BJP which had given Rs 25000 to each self-help group instead of the paltry sums doled out by the earlier Congress government in its 15-year period of rule.

Referring to Madani,  Sarma said that Madani was against the NRC updation process and was now opposed to Citizenship Amendment Bill 2016 at whose behest there was so much opposition here,  but the BJP was committed to update the NRC without errors and that the Bill was yet to be tabled.

The BJP seems to be targeting AGP strongholds with State Education Minister Siddhartha Bhattacharyya addressing a panchayat election meeting at the western outskirts of Jorhat under Dergaon Legislative Assembly under the AGP.

Even though AGP is an ally of the BJP-led government in the State, both the parties have parted ways for the Panchayat polls.  Jorhat goes to the panchayat polls on December 5.