Assam finance minister Himanta Biswa Sarma lauded the historic decision of the Parliament as it had abolished the age old Muslim practice of triple talaq.

The Rajya Sabha on Tuesday passed the Muslim Women (Protection of Rights and Marriage) Bill, 2019.

The Muslim Women (Protection of Rights and Marriage) Bill, 2019 or the Triple Talaq Bill was passed in the Upper House of the Parliament with 99 persons voting in favour of the Bill and 84 against it. 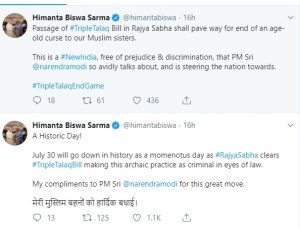 ‘A Historic Day! July 30 will go down in history as a momenotus day as #RajyaSabha clears #TripleTalaqBill making this archaic practice as criminal in eyes of law. My compliments to PM Sri @narendramodi for this great move.’

‘Passage of #TripleTalaq Bill in Rajya Sabha shall pave way for end of an age-old curse to our Muslim sisters. This is a #NewIndia, free of prejudice & discrimination, that PM Sri @narendramodi so avidly talks about, and is steering the nation towards.”

Under the Muslim Women (Protection of Rights and Marriage) Bill, 2019 divorcing through instant triple talaq will be a criminal offence and could attract a jail term of three years and a huge fine for the husband.

The Bill also allows married Muslim women against whom talaq has been declared to seek subsistence allowance from her husband.

It also makes her entitled to seek custody of her minor children.

The bill was passed in the Lok Sabha last week.

The Supreme Court had in 2017 declared the practice of instant triple talaq as unconstitutional.