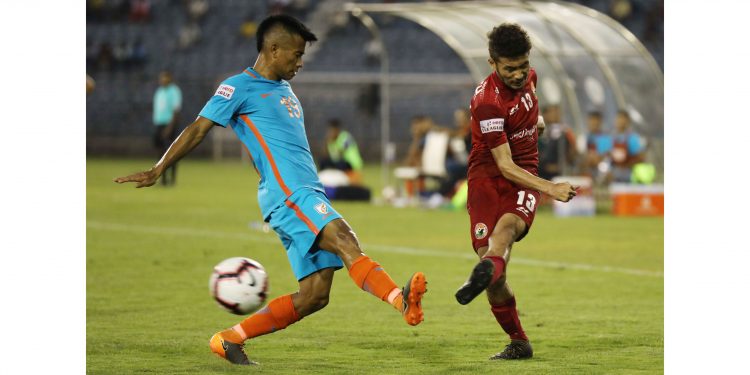 Indian Arrows defeated Shillong Lajong by 1-0 in the Hero I-League encounter played on Monday in Cuttack. Ashish Rai found the back of the net for the hosts in the 11th minute.

Shillong Lajong could have taken the lead in Monday’s match as early as the 2nd minute when presented a 2 on 1 opportunity after a clearance from the Arrows defence was blocked by Samuel Lalmuanpuia but his final pass to Mahesh was obstructed by the last defender.

Seconds later, Phrangki Buam received a lobbed ball by Samuel Lyngdoh inside the box but could not manage a shot on target. Indian Arrows broke the deadlock after a mistake by the Lajong defence and Ashish Rai scored a half volley from the edge of the box in the 11th minute, stated a match report posted on the official website of Shillong Lajong FC.

The report stated that Lajong enjoyed a lot of possession in the first half but lacked a clinical finisher up front from their chances created. Indian Arrows though looked dangerous on the counter, especially on the wings and in spite of more chances created by Lajong they seemed to be in control.

In the 28th minute, Samuel Lyngdoh made a run inside the box after a clever one-two with Mahesh, but his shot with the weaker left foot did not trouble the keeper. Later, Lalawmpuia Hnamte had a glorious chance to finish inside the box but instead decided to square it to Phrangki Buam, whose shot was protected by the legs of the defender. A couple of chances fell to Indian Arrows towards the end of the first half but could not capitalise.

In the second half, Lajong earned a corner kick in the first minute which then led to a throw in near the corner flag. Samuel Lalmuanpuia cut in from the left and took a shot but it fell safely in the hands of the keeper. Minutes later, Arrows themselves earned three consecutive corners but their attempt to double the lead was denied.

Trailing by one goal, Lajong tried to penetrate the Arrows defence with intricate passes but they were not successful in the final third. They did everything well taking the ball to the opponent’s box, but wasted their chances in front of goal. Nabin Rabha, Kynsai Khongsit and Sheen Sohktung replaced Mahesh, Lalawmupuia and Samuel Lyngdoh respectively in the second half for The Reds but the changes could not make an impact late in the game.

In the 88th minute, Aiban met a header from Samuel Lalmuapuia corner but it was cleared off the line. Few minutes later, Novin Gurung took a long range shot which deflected off a defender but the ball again fell safely into the keeper’s hands. The game thus ended 1-0 in favour to the Arrows team.

Lajong will travel next to Kerala as they hope to get a better result against Gokulam Kerala on 11th November 2018, the report added.