Incessant rainfall in the past few days has wreaked havoc in Meghalaya triggering landslides in many places while water in streams and rivers reached the danger level including Umkhrah river in Shillong city.

Landslides that damaged roads were also reported in many places including a road at Malki in Shillong.

Landslides occurred in many places that cut off many roads including a road in Mawsynram, about 60km from Shillong.

Umkhrah river, one of the polluted rivers in the city, has reached the danger level on Tuesday evening.

Plain areas in the city were also inundated while water logging because of poor drainage system caused flash floods in areas like Pynthorbah and Polo.

Flood water also entered the Jawaharlal Nehru Stadium and nearby grounds at Polo.

Football matches conducted by the Shillong Sports Association at Polo grounds were also postponed due to heavy rain.

Paddy fields including the one at Mawlai Umshing near the North Eastern Hill University have been covered with flood water causing damage to standing crops.

The continuous downpour also led to collapse of retaining walls and trees in different parts of the state because of loose soil. 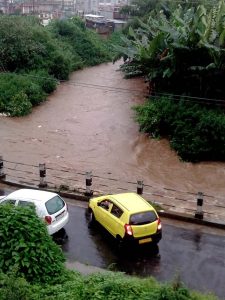 Till filing of the report, heavy downpour continued in the city. Sources said that no casualty was reported from any part of the state.

Deputy Commissioners of various districts were alerted and advisory has been issued for information of the public.

“People are advised to take extra care during heavy rainfall as there is likelihood of flash flood, especially in areas near rivers and streams. They are not to go near the water or walk through moving water and stay away from streams, drains, culverts. People are advised not to drive through flooded areas and stay away from electric poles or power lines to avoid electrocution. Students are advised not to cross rivers and streams during heavy rain and tourists visiting tourist spots should not venture into streams, rivers and waterfalls,” the advisory said.

Assam: Experts from Singapore to arrive on Sunday to contain blowout at Baghjan gas well

Assam: Experts from Singapore to arrive on Sunday to contain blowout at Baghjan gas well