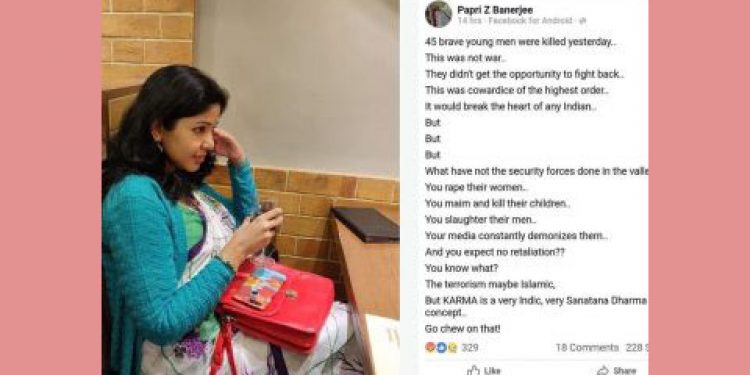 A college teacher in Guwahati, who was suspended on Saturday after a comment by her on Facebook regarding the Pulwama terror attack went viral, has allegedly received death threat.

In the terror attack at Pulwama in Jammu & Kashmir on Thursday, 44 CRPF jawans including Assam’s Maneshwar Basumarty, were killed and the incident shocked the entire nation.

Immediately after the attack, comments have been pouring in on the social networking sites where many have expressed their views.

In her Facebook post on Friday, Papri Z Banerjee, an Assistant Professor at Icon Commerce College in Guwahati, said:

This was not war..

They didn’t get the opportunity to fight back..

This was cowardice of the highest order..

It would break the heart of any Indian..

What have not the security forces done in the valley!

You rape their women..

You maim and kill their children..

You slaughter their men..

Your media constantly demonizes them..

And you expect no retaliation??

Go chew on that!”

The teacher alleges she has received death threats after her comment went viral on the social media. “Continuous rape, Lynch, and death threats in my inbox.. Assam Police should go back to the names in my previous FIR if any harm were to come over me tomorrow.. They would be solely responsible..,” she posted.

Meanwhile, after a Twitterati sharing the teacher’s post with the official Twitter handle of Assam police questioned: “How much lies being fed in colleges that such venom being vomited out to justify deaths of 45 Soldiers. She is professor in ikon (sic) Commerce College, Guwahati.”

Responding to the tweet, the Assam Police said: “This is being looked into and appropriate action will be initiated.”

Thank you for bringing this to our notice. This is being looked into and appropriate action will be initiated. https://t.co/g0Iqo9k52U

The Assistant Professor of Icon Commerce College was suspended by the college’s governing body on Saturday.

The suspension order to Papri Banerjee, issued by Debasish Bora, secretary of the governing body of Icon Commerce College on Saturday, said: “You are put under suspension with immediate effect till the matter is resolved by the competent authority.”

However, the teacher has alleged that the college authority has shared the suspension order with one who had once threatened her.