Govt efforts on to bring Vrindavani Vastra back to Assam: Sonowal 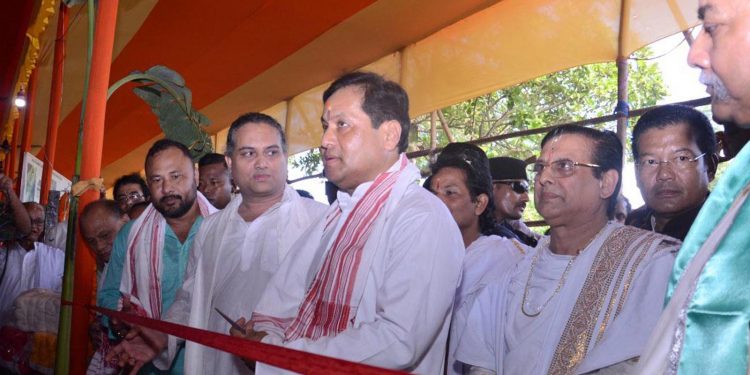 Assam chief minister Sarbananda Sonowal spinning yarn on a spinning wheel as part of an initiative to reproduce the sacred Vrindavani Vastra at the Dakhinpat Satra in Majuli on Sunday. Image credit - UB Photos

Assam chief minister Sarbananda Sonowal on Sunday took part in the landmark initiative of the Dakhinpat Satra in Majuli to reproduce the sacred Vrindavani Vastra and spun yarn to be used at the production of the drape by weavers at the Satra.

The chief minister also laid the foundation stone for construction of a museum at the Satra by the cultural affairs department of the state government in a bid to scientifically preserve the valuable artefacts available at the Satra.

The original Vrindavani Vastra was produced during the 16th century by weavers of the state under the guidance of Mahapurush Srimanta Sankardev.

The Vrindavani Vastra illustrates the childhood activities of Lord Krishna at Vrindavan.

Parts of the original drape are presently preserved at Victoria and Albert Museum in London and Guimet Museum in Paris.

Chief minister Sonowal while speaking on the occasion said that the state government has taken up sincere efforts to bring the Vrindavani Vastra back to Assam from Britain and Paris where it is being presently preserved in the museums.

The chief minister said that the state cultural affairs department has already made all necessary studies on the issue and has prepared a roadmap to arrange for display of the sacred drape in Assam.

Chief minister Sonowal highly lauded the initiative of the Dakhinpat Satra to reproduce the sacred drape.

He said that the step taken by the Satra would facilitate the younger generation to understand the invaluable contribution and legacy of Mahapurush Srimanta Sankardev and introduce them with the unique weaving skill of the Assamese weavers.

Further the chief minister said that Dakhinpat Satra is a treasure trove of large number of precious artefacts reflecting the rich socio-religious heritage of the state.

He also observed that the initiative taken by the state cultural affairs department to build a museum in the Satra would significantly help in scientific preservation of the artefacts.

Chief minister Sonowal along with other dignitaries also released a souvenir published to mark the occasion.