Four Meghalaya MLAs join BJP at a function in Shillong on Tuesday.

Four MLAs in Meghalaya resigned as members of the Assembly and joined the BJP, with over a month left before going to fresh Assembly polls.

Few minutes after resigning as members of the Assembly, the four MLAs joined the BJP at a function organized at Golf Link, which saw thin attendance of supporters. 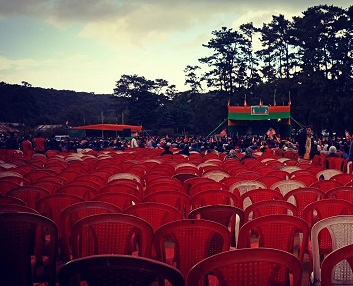 Hundreds of chairs remained empty at the function.

So far, a total of 13 MLAs – seven from the Congress, four Independents, one NCP (all supporting the Congress-led government), and one opposition MLA of the United Democratic Party have resigned.

The 60-member Assembly was now reduced to 47 members.

Hek termed the Congress his “wife’s house” and the BJP his “parents’ house.”

Sanbor Shullai, who was the NCP state president and two-time MLA from South Shillong, and the two Independents- Syngkon and Dkhar had won for the first time in 2013.

Besides Hek, Shullai, and the two Independents have been supporting the Congress-led government for five years since 2013.

He said that politically, he was born in the BJP, and now he was back to the BJP his parents’ home, even as he pledged that he would not go back to his house’s wife (Congress).

Meanwhile Assam health minister Dr Himanta Biswa Sarma who is also the convenor of NEDA (North East Democratic Alliance) said that BJP would gain experience from the experiences of the four MLAs as the party is gearing up to bring change in Meghalaya. “We welcome Meghalaya MLAs A L Hek, Sanbor Shullai, Justine Dkhar and Robinus Syngkon in BJP. BJP will tremendously gain from your experiences as we get ready for change,” Sarma twitted.