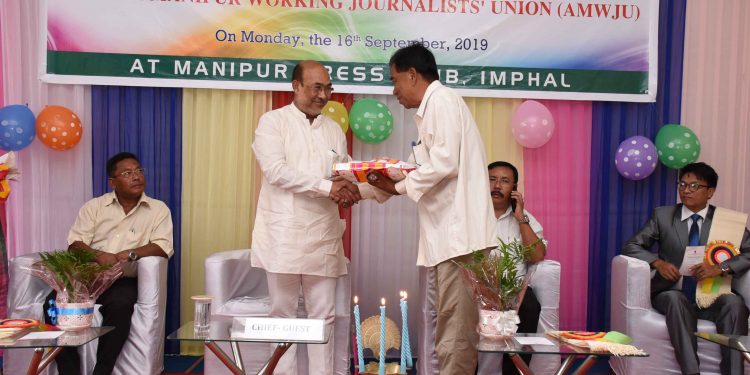 Manipur Chief Minister Nongthombam Biren Singh on Monday lauded the activities of the journalists’ fraternity in the State.

N Biren was speaking at the 46th foundation day function of the All Manipur Working Journalists’ Union (AMWJU) in Imphal.

Expressing his desire to gather the public opinion on regulation of liquor in the State, he appealed to the media fraternity to organize awareness campaign and discussion on the pros and cons on it.

The chief minister made his comment on this after the state police recently seized many adulterated liquor in one of the districts apart from getting report of unwanted incidents after consuming adulterated liquor during People’s Day and Hill Leaders Day which were organized every month to hear the grievances of the public.

Conveying his interest to work together to gather public opinion on the advantages and disadvantages of the poppy plantation in the State as it encourages degradation of the top soil and ultimately helps in siltation of the water bodies, he also sought help and cooperation from the media fraternity in addressing the public issues.

On the proposal to increase the amount of the pension provided to the retired journalists, he assured that he would look it as per the existing Manipur State Journalists Pension Scheme and others for the increase of number of press identity cards issued by Directorate of Information and Public Relations.

In his presidential address, president Bijoy Kakchingtabam of AMWJU maintained that working journalists should be united and work together to fight against external pressure.

He narrated various problems faced by the journalists while executing their task in the State.

Chief minister Biren also distributed prizes to the winner and runner-up of the 9th Annual Sports Meet of the AMWJU held during Yaoshang, the Manipuri holi festival 2019 besides honouring the founding members of AMWJU during the function.

Many senior editors, journalists including the government officials also attended the day’s foundation of AMWJU.