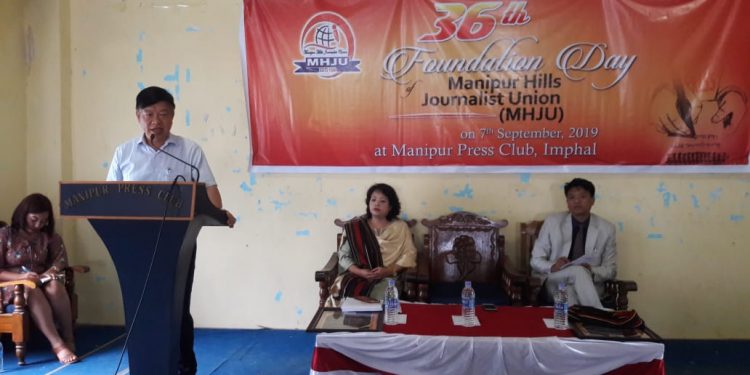 The 36th foundation day of the Manipur Hill Journalists Union (MHJU) was held at Manipur Press Club hall in Imphal on Saturday.

The assistant publicity officer T Sangeeta of Directorate of Information and Public Relations and president Ramkung Pamei of MHJU also attended the gathering.

Speaking on the occasion Lok Sabha MP Lorho called upon the journalists’ fraternity to work for the betterment of the society as the union observes its 36th foundation day.

He also lauded the activities of the journalists in the hill despite facing challenges due to its geographical locations.

He also expressed the need to present the news as it is without any manipulation.

So that there will be no mistrust if the information is presented properly and correctly, the MP felt.

In his speech, MHJU president Ramkung highlighted the history of the union along with its activities for the welfare of its members.

A number of journalists from districts of Churachandpur, Chandel, Senapati, Tamenglong, Noney and Ukhrul districts also attended the day’s programme.

The members of the MHJU also observed two minutes silence over the untimely demise of its members during the gathering.

According to reports, there are around 10 daily newspapers in the hill districts of the State including five in Churachandpur, three in Tamenglong and one each in Senapati and Ukhrul.

There are also reports of having around five cable TV networks which telecast news in local dialects in Churachandpur district.