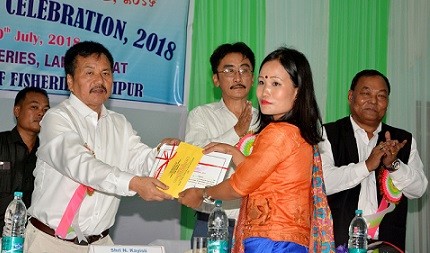 A view of the award presentation ceremony organised on the occasion of the Fish Farmers Day. Image - Northeast Now

The 18th Fish Farmers’ Day was observed in Manipur in a function wherein the fish farmers were awarded for their continuous effort to encourage fish farming in the country.

The 10th of July has been observed as the Fish Farmers Day in the country since 2001 to encourage and give tribute to the endeavours of the fish farmers in the country.

Kayisii stressed on the need for concerted effort to be on the right track towards attaining self-sufficiency in fish production.

A booklet titled ‘Better Management Practices for Fish Culture’ was also released during the day’s function.

District fisheries officers T Shyamananda(Bishnupur) and Kh Ibetombi Devi (Churachandpur) were also honoured with cash reward of Rs 10,000 each as the winner of district officers with highest fish producers in the valley and hill districts respectively.