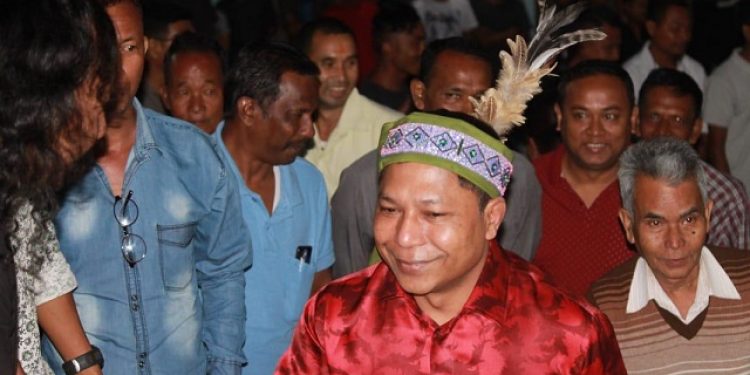 Meghalaya, where there are two parliamentary seats, will go to Lok Sabha polls on April 11, 2019.

Congress candidate Mukul Sangma held a series of meetings on Wednesday at Tura Bazar, Palm Dale, Matchakolgre to garner support for him in the ensuing Lok Sabha election.

During the election campaign, Mukul Sangma spoke at length about the series of developmental works he had done during his tenure as the Meghalaya CM.

“When I was the chief minister, many leaders from different civil societies, church elders, local elders came to me and approached me to address the problems of insurgency and together with all the concerned citizens, we managed to bring back normalcy and peace in the state,” said Mukul Sangma.

“In order to bring developmental works in the region, there must be peace which we achieved and it was not an easy task but with the zeal of the people, it was not a mission impossible,” the ex-CM said.

He further said that several years back, when he went to New Delhi, many people asked him about how many medical colleges and engineering colleges they had in the state.

Recalling the past, Mukul Sangma said, “I was ashamed to say ‘none’ as our state was supposedly known as an educational hub of the Northeast. So how would I reply ‘no’ to their questions. Our opponents start blame game saying Dr. Mukul didn’t do any developmental work… Dr. Mukul has bankrupted the state and what not?”

The former CM claimed that he had run the government in Meghalaya for 8 long years and “there was no bankruptcy in the state”.

“The list goes on and on. I have given the people the visible development,” he said.

Stating that he became MLA from Ampati for the first time when he was 27 years old, Mukul Sangma said that during Assembly, question was always raised regarding the road to Tura via Shillong.

“When I became the chief minster, the first thing I did was construction of the Shillong-Guwahati four-laning work and completed it in a record time of three years and then the Shillong-Nongstoin-Tura Road, Dhubri-Phulbari NH 127B road,” claimed Mukul Sangma.

“I am confident that what I could have done or whatever I can present as the chief minister of the state I have done. So, now I am dedicating myself to serve you in the capacity of an MP to lend the voice in the Parliament and bring development to the region,” Mukul Sangma told the people and said if elected as MP he would transform Garo Hills with the support of the region’s people.