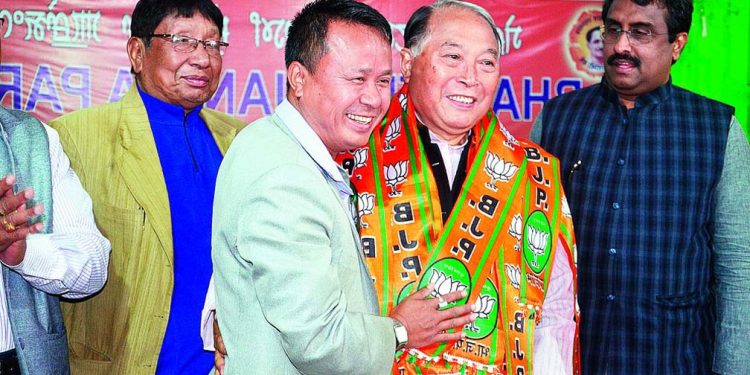 Koijam has submitted his resignation letter to the president of Manipur BJP, K Bhabananda.

This was announced by former CM Koijam during a press conference in presence of former MLA H Sanayaima at his Thangmeiband residence in Imphal on Thursday afternoon.

On being asked why he resigned from the saffron party which he joined after four long years of hibernation from politics, the veteran politician said that the move is to step away from active politics.

The ex-chief minister said he wants to walk out of active politics and work from a different platform.

Regarding denial of BJP ticket to fight the ensuing Lok Sabha polls, the former chairman of citizens’committee of Manipur, a political group comprising professionals of diverse fields, said that he feels unhappiness being a human.

But he said he will continue to serve the people.

He said, “My message is to select the qualified person.”

The veteran politician, who was among the BJP ticket aspirants for the Lok Sabha polls this time, also felt that the selected party candidate is also a qualified one.

Seventy-five-year-old Radhabinod Koijam, popularly known as RB Koijam, joined the BJP online in 2014, according to reports.

But he had not been politically active until the formal reception was organised in presence of BJP leader Ram Madhav in February 2017.

He was the chief minister of Manipur from February to May in 2001.

He was elected as MLA from Thangmeiband five times in between 1980 to 2007.

On March 28, ex-MP Kim Gangte, who was in charge of the BJP in the hills areas, also resigned from the party for being denied party ticket to her to fight the ensuing Lok Sabha polls.

Kim Gangte, who is a politician, educationist and a human rights activist, was the lone woman Lok Sabha MP from Manipur.