People in villages under Kalyanpur Development Block in Khowai district of Tripura have passed tense situation as herds of elephants have damaged their agricultural fields.

The villagers have demanded compensation for the losses due to elephant menace.

As per information, there are more than 52 families residing in Durgapur, Mukta Chandra villages which fall under Kalyanpur Development Block in Khowai district and their only source of livelihood is farming and agriculture.

Sources informed that every year, herds of elephants come to the agricultural fields when the villagers sow paddy and damage the paddy fields. 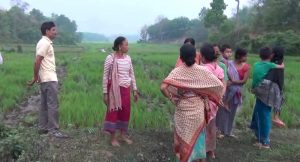 The scenario has remained the same for the past several years.

The villagers have informed the Forest Department as well the authorities concerned but so far no action has been taken.

With the change in the political system, the villagers have demanded that they be supported by the new government and be compensated for their losses.